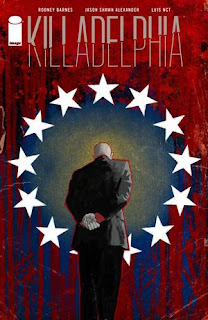 KILLADELPHIA #27
IMAGE COMICS
STORY: Rodney Barnes
LAYOUTS: Jason Shawn Alexander
PENCILS: Germán Erramouspe
INKS: Jason Shawn Alexander
COLORS: Lee Loughridge
LETTERS: Marshall Dillon
EDITOR: Greg Tumbarello
COVER: Jason Shawn Alexander
VARIANT COVER ARTIST: Ben Templesmith
32pp, Colors, 3.99 U.S. (January 2023)
Rated “M/ Mature”
Killadelphia created by Rodney Barnes and Jason Shawn Alexander
“There's No Place Like Home” Part III: “When God Turns Away”
Killadelphia is an apocalyptic vampire and dark fantasy comic book series from writer Rodney Barnes and artist Jason Shawn Alexander.  Published by Image Comics, it centers on a conspiracy in which vampires attempt to rule Philadelphia.  The series is currently written by Barnes and drawn by Alexander and Germán Erramouspe.  Colorist Lee Loughridge and letterer Marshall Dillon complete Killadelphia's creative team.
Killadelphia focuses on James “Jim” Sangster, Jr. and a ragtag team fighting the vampire invasion of Philadelphia.  Among them are a medical examiner (Jose Padilla), werewolves, a witch, and a rebellious, but special young vampire (Tevin Thompkins a.k.a. “See Saw”).  But their current adversary is an infamous rebel leader turned monster hunter and his army of killers.
As Killadelphia #27 (“When God Turns Away”) opens, Anasi the Spider-God is contemplating his place and the place of humans in all things reality.  War and death and gods occupy his mind, and now, he must return to the streets of Hell for a meeting with an entity that does not seem bothered by deep thoughts.
Meanwhile, former President George Washington – the undead, vampire version of him – and his vampire army are put on the defensive as they fight for survival against Toussaint Louverture and his Haitian guardians.  Will the Founding Father and his boys be able to turn the tide, or will heavy losses and insurmountable odds seal their fate as another American myth bites the dust.
THE LOWDOWN:  We are at the middle point of Killadelphia's fifth story arc, “There's No Place Like Home.”  Before this arc debuted, creators Rodney Barnes and Jason Shawn Alexander warned readers that they were not prepared for what was coming in the arc – which has proven to be true, very true.
The first two issues of this arc caused me sadness with their shocking endings.  This time, however, writer Rodney Barnes made me happy.  His glorious scripts are in tune with the current state of the good ol' U.S. of A.  This nation must reckon with its racist and genocidal past, and it is too late for that racial reckoning to go down gently.  At times, metaphorical and allegorical, Killadelphia is perhaps a modern Book of Revelation – with some cool vampire action driving the revelation.
New pencil artist Germán Erramouspe and colorist Lee Loughridge have joined artist Jason Shawn Alexander for this arc.  The result is a fiery cataclysm of comic book storytelling that is seemingly not sparing sacred cows.  Holding this comic book might cause our hands and forearms to catch fire before it is finished, dear readers.
Sometimes, it is okay not to be prepared for the shocks that a creative team is delivering.  Issue #27 has left me pleased.  Come share this pleasure with me.
NOTE: Killadelphia #27 is also available in a “Noir Edition,” featuring black-and-white line art interiors.
I READS YOU RECOMMENDS:  Fans of vampire comic books and of exceptional dark fantasy will want Killadelphia.
A+
Reviewed by Leroy Douresseaux a.k.a. "I Reads You"
https://twitter.com/TheRodneyBarnes
https://twitter.com/jasonshawnalex
https://twitter.com/MarshallDillon
https://twitter.com/ImageComics
https://imagecomics.com/
http://rodneybarnes.com/
https://www.instagram.com/imagecomics/
https://www.facebook.com/pages/Image-Comics-Inc/178643148813259
https://www.twitch.tv/imagecomics
https://www.youtube.com/channel/UCHmaKLo0FXWIPx-3n6qs3vQ
https://www.linkedin.com/company/image-comics/
The text is copyright © 2023 Leroy Douresseaux. All Rights Reserved. Contact this blog or site for reprint and syndication rights and fees.
------------------------
Amazon wants me to inform you that the affiliate link below is a PAID AD, but I technically only get paid (eventually) if you click on the affiliate link below AND buy something(s).
Posted by Leroy Douresseaux at 4:56 AM