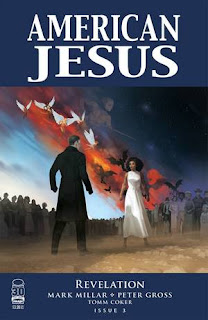 AMERICAN JESUS: REVELATION #3 (OF 3)
IMAGE COMICS
STORY: Mark Millar
ART: Peter Gross with Tomm Coker
COLORS: Jeanne McGee with Daniel Freedman
LETTERS: Cory Petit
COVER: Jodie Muir
EDITORIAL: Sarah Unwin
28pp, Color, $3.99 U.S. (January 2023)
Rated M / Mature
American Jesus created by Mark Millar and Peter Gross
American Jesus is a comic book series created by writer Mark Millar and Peter Gross that is being published as three comic book miniseries.  American Jesus began life as Chosen, a three-issue miniseries that was published by Dark Horse Comics in 2004, and continued in American Jesus: The New Messiah, a three-issue series published by Image Comics in 2019-20.
The series concludes in American Jesus: Revelation, a three-issue series written by Millar; drawn by Gross with Tomm Coker; colored by Jeanne McGee and Daniel Freedman; and lettered by Corey Petit.  The series offers the epic conclusion to the greatest story ever told.
American Jesus: Revelation #3 opens in 1969 at the birth of Jodie Christianson, the Anti-Christ.  Now, he is the President of the United States and is slated to kick of the End of Days.  However, moments after his birth, who really wants the little bastard?
Meanwhile, Catalina, who is the Savior and the Christ-reborn, is an an honest-to-god black woman.  She awaits Jodie in the city of Megiddo.  Will a 2000-year-old prophecy be finally fulfilled?  … Will it be fulfilled the way it is supposed to be fulfilled?
THE LOWDOWN:  Netflix/Millarworld sent me PDF review copies of American Jesus, Vols. 1 and 2.  I had not read them until recently, and I needed to do so in preparation for American Jesus: Revelation.  But nothing could prepare me … really … nothing.
Of course, American Jesus: Revelation #3 does not end the way anyone would think.  This is a Mark Millar comic book, and he won't ever cheat his readers by giving them what they expect.  Remember that incident with Giant-Man/Ant-Man, the Wasp, and a horde of ants in The Ultimates?  [The Ultimates is the “inspiration,” both visually and thematically, for the Marvel Cinematic Universe.  It is available from Marvel Comics for your reading pleasure in multiple print and digital formats.]
So, in American Jesus: Revelation #3, what has really creeped me out, scared my shitless, and disturbed me is the return of the dead.  I won't give you the hows for fear of spoiling the entire … thing, but after reading those few pages, I felt like I needed a drink, a crack pipe, and a shower.
The lovely Peter Gross brings Millar's … lurid storytelling to life with the skill of a veteran comic book artist blessed with great comic book storytelling chops.  Colorist Jeanne McGee obviously sported a wicked grin while coloring this.  Artist Tomm Coker and colorist Daniel Freedman have contributed to this series and are also guilty in the eyes of God.
I am in awe of Millar's imagination, and I love that he finds the perfect artists to bring his visions to life, as Peter Gross is here.  Seriously, American Jesus: Revelation is delightfully wicked and truly unique.  Once again, Millarworld is like no other world, and we may have to accept it as our paradise.  There is no way we are getting into Heaven after reading and enjoying American Jesus: Revelation #3.
I READS YOU RECOMMENDS:  Fans of Mark Millar's comic books and of the American Jesus series must read American Jesus: Revelation.
A+
Reviewed by Leroy Douresseaux a.k.a. "I Reads You"
https://twitter.com/ImageComics
https://twitter.com/mrmarkmillar
https://twitter.com/netflix
https://www.mrmarkmillar.com/
http://www.millarworld.tv/
www.imagecomics.com
The text is copyright © 2023 Leroy Douresseaux. All Rights Reserved. Contact this blog or site for reprint and syndication rights and fees.
---------------------
Amazon wants me to inform you that the affiliate link below is a PAID AD, but I technically only get paid (eventually) if you click on the affiliate link below AND buy something(s).
Posted by Leroy Douresseaux at 5:08 AM