Review: "HONK FOR JESUS. SAVE YOUR SOUL." is Both Funny and Ruthless 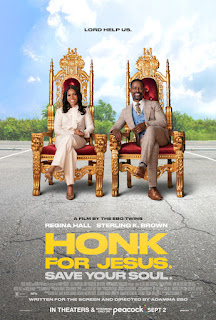 TRASH IN MY EYE No. 2 of 2023 (No. 1891) by Leroy Douresseaux
Honk for Jesus. Save Your Soul (2022)
Running time:  102 minutes (1 hour, 42 minutes)
MPA – R for language and some sexual content
DIRECTOR:  Adamma Ebo
WRITER: Adamma Ebo (based on her short film)
PRODUCERS:  Sterling K. Brown, Jessamine Burgum, Matthew R. Cooper, Amandla Crichlow, Kara Durrett, Adanne Ebo, Regina Hall, Daniel Kaluuya, and Rowan Riley
CINEMATOGRAPHER:  Alan Gwizdowski
EDITORS:  Ali Greer and Stacy Moon
COMPOSER:  Marcus Norris
COMEDY/RELIGION
Starring:  Regina Hall, Sterling K. Brown, Nicole Beharie, Conphidance, Austin Crute, Dever Rogers, Robert Yatta, Greta Glenn, and Selah Kimbro Jones
Honk for Jesus. Save Your Soul. is a 2022 comedy-drama and mockumentary (mock documentary) film from writer-director Adamma Ebo.  The film is Ebo's directorial debut and is also a feature-length adaptation of Honk for Jesus. Save Your Soul, her 2018 short film.  Oscar-winner Jordan Peele is one of the film's executive producers.  Honk for Jesus. Save Your Soul. the film focuses on the first lady of a megachurch as she attempts to help the pastor of the church rebuild his congregation in the wake of a scandal.
Honk for Jesus. Save Your Soul. is largely set in and around Wander to Greater Paths Baptist Church in Atlanta, Georgia.  The film introduces Pastor Lee-Curtis Childs (Sterling K. Brown) and his wife, the church's “First Lady,” Trinitie Childs (Regina Hall).  Lee-Curtis preaches the “prosperity gospel,” and he and his wife live a lavish lifestyle that is a big as their megachurch.
Once upon a time, Wander to Greater Paths (WGP) had about 25,000 congregants, but Pastor Lee-Curtis became embroiled in a notorious scandal that involves multiple sexual misconduct allegations.  Lee-Curtis and Trinitie were forced to close the church after backlash and a mass exodus of congregants.
Now, a year later, the Childs plan to reopen the church in one month on Easter Sunday.  They have also hired a documentary film crew to chronicle their lives and the preparation during the run-up to the reopening.  However, Trinitie finds the crew and its director, Anita Bonet, to be intrusive.  Also, the Childs struggle to get people interested in their return, so Lee-Curtis comes up with an idea for a roadside ministry, entitled “Honk for Jesus.”  Will that scheme save the church … and the couple's marriage?
Some of you, dear readers, are familiar Pentecostal televangelist (television evangelist), Jimmy Swaggart.  Beginning in 1988, a series of scandals, two of them involving Swaggart's relationship with prostitutes, caused him to lose a significant number of congregants at his megachurch, Family Worship Center, in Baton Rouge, Louisiana.  His Jimmy Swaggart Bible College also saw a drastic drop in enrollment, largely in part to his 1988 sex scandal.
A former coworker of mine was a devout Christian, and he considered Swaggart to be a hypocrite because of his scandals.  I told him that I did not quite see it that way.  I argued that the most successful evangelical preachers were probably intimately familiar with sin, especially related to sexual activity.  I said that what made Swaggart a hypocrite wasn't him sneaking around for some kind of sexual contact with a prostitute, but rather that he frequently condemned people who were engaged in sexual activity of which he did not approve.  He insisted that other sinners pay a price for sexual improprieties that he clearly did not expect to pay himself.
Honk for Jesus. Save Your Soul. is not the greatest mockumentary (which is still This is Spinal Tap), but it is a very good comedy about characters that are difficult when laid bare.  Honk for Jesus. Save You Soul. makes it clear that the Childs, especially Pastor Lee-Curtis, are oblivious and lack self-awareness.  Lee-Curtis condemns those engaged in the same kind of sexual activity which brought him down, and his behavior is also predatory.  It is not just the nature of his sin; it is also that he betrayed the trust of the people who relied on him for help.
Sterling K. Brown shines as Pastor Lee-Curtis, depicting him not as evil, but as narcissistic, vain, and material.  His faith, God, the Bible, and his success are about himself and not about salvation or about “saving souls.”  He collects “saving souls” and congregants seemingly the same way he collects Italian suits and clothing, jewelry, and cars.  Brown deftly conveys to the audience that the reopening of Wander to Great Paths is all about shining on Lee-Curtis and not necessarily on God.
I think the film really turns on Regina Hall's performance, a mixture of comedy, drama, and pathos.  From start to finish, Hall's performance chronicles the difficulty that is Trinitie's mission to save their church.  Although she is known for comedy, Hall shows serious dramatic chops in conveying the ultimate futility of the couple's quest, especially in those painful scenes in which she faces either their detractors or Lee-Curtis' victims.
Mock or faux documentary films are generally comedies, although they have dramatic and poignant moments.  Writer-director Adamma Ebo pulls off the trick of producing a mockumentary that is more drama than comedy.  Getting a great performance from her cast, especially Regina Hall, is what makes Ebo's film highly original and even more substantive than mockumentary films generally are.  My take is that Honk for Jesus. Save Your Soul. is both a portrayal of a corrupted megachurch pastor and first lady and also a commentary on the megachurches that pedal the prosperity gospel.
Mockumentary films generally always seem to be a tad bit longer than they need to be, and they are at their best in their first acts.  The best energy in Honk for Jesus. Save Your Soul. is in its second half, especially its last act.
7 of 10
B+
★★★½ out of 4 stars
Tuesday, January 10, 2023
The text is copyright © 2023 Leroy Douresseaux. All Rights Reserved. Contact this blog or site for reprint and syndication rights and fees.
------------------------
------------------------
Posted by Leroy Douresseaux at 4:22 AM