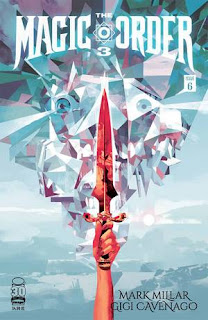 THE MAGIC ORDER 3 #6 (OF 6)
IMAGE COMICS/Netflix
STORY: Mark Millar
ART: Gigi Cavenago
COLORS: Valentina Napolitano
LETTERS: Clem Robins
EDITORIAL: Sarah Unwin
COVER: Gigi Cavenago
VARIANT COVER ARTISTS: Gigi Cavenago; Greg Tocchini
36pp, Color, $3.99 U.S. (December 2022)
Rated M / Mature
The Magic Order created by Mark Millar at Netflix
The Magic Order was a six-issue comic book miniseries written by Mark Millar and drawn by Olivier Coipel.  Published in 2018-19, the series focuses on The Magic Order, a band of sorcerers, magicians, and wizards – with a focus on the Moonstone family.  They live ordinary lives by day, but protect humanity from darkness and monsters of impossible sizes by night.  A second six-issue miniseries, The Magic Order 2 (2021-22), was recently published.
The Magic Order 3 introduces the Asian chapter of the The Magic Order.  A six-issue miniseries, this third installment is written by Millar; drawn by Gigi Cavenago; colored by Valentina Napolitano; and lettered by Clem Robins.  The series finds Cordelia Moonstone focusing her attention on the Asian chapter's Sammy Liu and his impossible wealth.  Meanwhile, the ghosts of an old conflict stir, and someone within the Order is living foul.
The Magic Order 3 #6 opens with Cordelia forced to punish her brother, Regan, who has been casting a spell that protects him but steals from everyone else.  Meanwhile, their reunited parents, Leonard and Salome, meet their dark destiny.  Everything begins to fall apart for the Moonstones and for the Order like never before.
THE LOWDOWN:  My favorite Mark Millar Netflix creation is The Magic Order.  It always surprises me, and before I read each issue I wonder not if, but how I will be surprised.
Well... I certainly can't spoil this for you, but Millar stabs your brain.  Gigi Cavenago draws it all out in order to shock what is left of your brain after an issue full of shocking shocks and salad-tossing surprises.  Napolitano's colors have a strobe effect, the better to freeze your blood, dear readers, as you are reading the lurid events of this crazy-ass final issue of The Magic Order 3.  It is all there – written in acid via Clem Robins great-as-usual lettering.
I believe that I always say the following:  Mark and his collaborators obviously have respect for their readers.  They go out of their way to throw one curve ball after another, and they always give us more than we expect.  The Magic Order is like the marriage of Godfather II and the darkest elements of Harry Potter, with some British crime cinema nastiness thrown into the cauldron.
Also, while The Magic Order and The Magic Order 2 were, more or less, standalone series.  The Magic Order 3 is intimately and wretchedly tied to the upcoming The Magic Order 4.  I would ask God to help us, but he knows that many of us have also read American Jesus.  So we're on our own with the dark and darker delights to come in The Magic Order franchise.
I READS YOU RECOMMENDS:  Fans of Mark Millar and of The Magic Order will want to read The Magic Order 3.
A+
Reviewed by Leroy Douresseaux a.k.a. "I Reads You"
https://www.mrmarkmillar.com/
https://twitter.com/ImageComics
https://twitter.com/mrmarkmillar
https://twitter.com/netflix
https://twitter.com/themagicorder
http://www.millarworld.tv/
www.imagecomics.com
The text is copyright © 2023 Leroy Douresseaux. All Rights Reserved. Contact this blog or site for reprint and syndication rights and fees.
---------------------------
Amazon wants me to inform you that the affiliate link below is a PAID AD, but I technically only get paid (eventually) if you click on the affiliate link below AND buy something(s).
Posted by Leroy Douresseaux at 4:56 AM