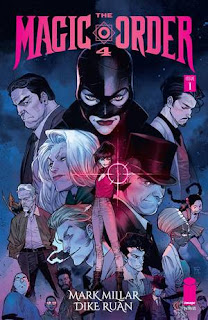 THE MAGIC ORDER 4 #1 (OF 6)
IMAGE COMICS/Netflix
STORY: Mark Millar
ART: Dike Ruan
COLORS: Giovanna Niro
LETTERS: Clem Robins
EDITORIAL: Sarah Unwin
COVER: Dike Ruan with Giovanna Niro
VARIANT COVER ARTIST: Rafael Albuquerque
36pp, Color, $3.99 U.S. (January 2023)
Rated M / Mature
The Magic Order created by Mark Millar at Netflix
The Magic Order was a six-issue comic book miniseries written by Mark Millar and drawn by Olivier Coipel.  Published in 2018-19, the series focuses on The Magic Order, a band of sorcerers, magicians, and wizards – with a focus on the Moonstone family.  They live ordinary lives by day, but protect humanity from darkness and monsters of impossible sizes by night.  Two more six-issue miniseries, The Magic Order 2 (2021-22) and The Magic Order 3 (2022), were recently published.
The Magic Order 4 finds the Order in turmoil.  A six-issue miniseries, this fourth installment is written by Millar; drawn by Dike Ruan; colored by Giovanna Niro; and lettered by Clem Robins.
The Magic Order 4 #1 opens immediately following the revelations of The Magic Order 3's finale.  The Magic Order is in turmoil because Cordelia Moonstone was forced to expel her brother, Regan, and strip him of his powers because of his crimes.  Now, whispers of discontent persist among the other wizards, and a coup is brewing
Some are tired of the rules under which they have all been living.  They want to enjoy having magical powers – really enjoy those powers.  An old enemy has returned in a shocking new guise, and she may be able to help the discontented become contented.
THE LOWDOWN:  My favorite Mark Millar Netflix creation is The Magic Order.  It always surprises me, and before I read each issue I wonder not if, but how I will be surprised.  Every time I think I might creep away and choose a new Millarworld favorite to love, The Magic Order drags me back.
Dike Ruan, the artist for The Magic Order, has a drawing style that is similar to The Magic Order's earlier artists, Olivier Coipel and Stuart Immonen.  This fourth series is dark and filled with explicit violence and brutal murders, as was the first two series, so it is appropriate that Ruan is the artist here.  The Magic Order 4 is different in tone from The Magic Order 3, which hopped around dimensions, realities, and time zones, which the third series' artist, Gigi Cavenago, captured with an kinetic style that crackled around the shifts in space-time-magic.
I am determined to spoil as little as possible, but I can say that Millar goes for the readers' nuts and the jugulars in this first issue.  As great as Frank Miller's Batman: The Dark Knight Returns is, its sequels, which have their good points, lack the intensity of the original.  The Magic Order sequels are different because Millar never lets up.  He allows each installment to stand on its own as a shocking, but substantial narrative.  Each sequel of The Magic Order is complete as a plot, even as it receives elements from previous installments and also sends out elements to what follows it.
So, here we are with the start of The Magic Order 4.  It seems to say that power corrupts and the absolute power of reality-altering magic will absolutely corrupt everyone that it touches.  Millar and Dike Ruan are a determined pair; they want us to feel the pain this time.
I READS YOU RECOMMENDS:  Fans of Mark Millar and of The Magic Order will want to read The Magic Order 4.
A+
Reviewed by Leroy Douresseaux a.k.a. "I Reads You"
https://www.mrmarkmillar.com/
https://twitter.com/ImageComics
https://twitter.com/mrmarkmillar
https://twitter.com/netflix
https://twitter.com/themagicorder
http://www.millarworld.tv/
www.imagecomics.com
The text is copyright © 2023 Leroy Douresseaux. All Rights Reserved. Contact this blog or site for reprint and syndication rights and fees.
----------------
Amazon wants me to inform you that the affiliate link below is a PAID AD, but I technically only get paid (eventually) if you click on the affiliate link below AND buy something(s).
Posted by Leroy Douresseaux at 4:48 AM