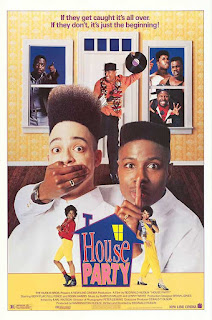 TRASH IN MY EYE No. 3 of 2023 (No. 1892) by Leroy Douresseaux
House Party (1990)
Running time:  104 minutes (1 hour, 44 minutes)
MPAA – R
WRITER/DIRECTOR: Reginald Hudlin
PRODUCER:  Warrington Hudlin
CINEMATOGRAPHER:  Peter Deming (D.o.P.)
EDITOR:  Earl Watson
COMPOSERS: Marcus Miller and Lenny White
COMEDY/MUSIC
Starring:  “Kid 'n Play”: Christopher “Kid” Reid and Christopher “Play” Martin; Robin Harris, Martin Lawrence; “Full Force”: “Paul Anthony” George, Lucien “Bow-Legged Lou” George, Jr., and Brian “B-Fine” George; Tisha Campbell, A.J. Johnson; “Grove B. Chill: Gene “Groove” Allen and Daryl “Chill” Mitchell; Kelly Jo Minter, John Witherspoon, BeBe Drake, Clifton Powell, J. Jay Saunders, Barry Diamond, Michael Pniewski, and George Clinton
House Party is a 1990 comedy film from writer-director Reginald Hudlin.  The film stars the then popular hip duo, “Kid 'n Play,” and is based on Hudlin's 1983 student short film, which he made while attending Harvard University.  House Party focuses on music, romance, and the unpredictable at school night house party.
House Party also features supporting performances by three members of “Full Force,” a hip hop and R&B musical group known for singing, songwriting, and producing.  There are also two members of the hip hop duo, “Groove B. Chill,” and a cameo by noted funk musician, George Clinton.  The film also stars the late comedian Robin Harras (1953-90), who died nine days after the film's release.
House Party introduces aspiring rapper, Christopher Robinson, Jr. a.ka. “Kid” (Christopher “Kid” Reid).  He is looking forward to a house party thrown by one of his best friends, Peter Martin a.k.a “Play”(Christopher “Play” Martin).  However, while at high school, Kid has a lunchroom altercation with a bully, Stab (“Paul Anthony” George), and his two associates, Pee-Wee (Lucien “Bow-Legged Lou” George, Jr.) and Zilla (Brian “B-Fine” George).
Kid goes home and convinces his father, Christopher Robinson, Sr. a.k.a. “Pops” (Robin Harris), to let him attend the party, although it is on a school night.  After he receives a note from Kid's school about the lunchroom fight, Pops forbids Kid from attending the party as punishment.  Kid sneaks out and attends the party anyway, but his father isn't the only one he has to avoid.  Stab and the boys are ready to deliver a beat-down as soon as they find Kid.  Will Kid avoid his tormentors long enough to enjoy the party?  Which girl will Kid choose:  Sydney (Tisha Campbell) or Sharane (A.J. Johnson)?  Will Play stop annoying Bilal (Martin Lawrence), the DJ at his party?  And who will win the battle of rhymes – Kid or Play?
The National Film Preservation Board of the Library of Congress recently made House Party one of its 2022 selections to the  “National Film Registry.”  Films that make the registry are considered to be “culturally, historically, or aesthetically significant.”
House Party certainly fits that description, perhaps on all levels.  House Party was the first African-American teen comedy to receive mainstream success, both theatrically and in home entertainment.  As a “hood movie” (a film set in an inner city, predominantly African-American neighborhood), it shares elements with other other hood films:  police harassment, school violence, “the projects,” single-parent homes, working class homes, poverty, etc.  However, House Party is straight comedy, and what other “hood movies” treat as high drama or as teary melodrama, House Party plays for humor.  For instance, the character Sharane is “from the projects,” but she lives in an apartment in a nicely appointed Section 8 complex with her quiet, extended family.  Also, the two white police officers that vex Kid and Stab, Pee-Wee and Zilla are mostly harmless, although the film does suggest that they do physically abuse some of the characters off-camera.
Despite the fact that the film was released almost 33 years ago and was likely filmed almost 34 years ago, House Party still seems fresh.  Perhaps, that is because the film is filled with authentic examples of the African-American pop culture of the time.  The fashions, hairstyles, dancing, music, and dialogue are more treasures (sans the edginess) from a time capsule than than they are remnants from a bygone era.
This recent viewing was the first time in about 30 years that I had watched the film in its entirety, and I discovered that I still love the cast today as much as I did then.  Some, like Martin Lawrence, Tisha Campbell, and Darryl “Chill” Mitchell, have had long careers in television.  Others, like Kid 'n Play, left their heyday behind decades ago, which is a shame.  As “Kid 'n Play,” Christopher “Kid” Reid and Christopher “Play” Martin were personable and had excellent chemistry together.  I think media companies never really tapped into their potential as media stars.  It is also a little sad to wonder what would have been with Robin Harris in regards to the House Party sequels.
At that time, however, the entire cast came together and worked like a well-oiled machine.  House Party's infectious and exuberant soundtrack provides the perfect backdrop to writer-director Reginald Hudlin's lighthearted, but energetic comic romp.  The plot is fairly routine, but the execution is what makes this film really work.  Maybe, what makes House Party “culturally, historically, or aesthetically significant” is that it was and still is a fresh look at Black teens who party hard and squabble often without anyone getting a cap popped in his or her ass.  House Party still seems unique, and I can attest that it is still a blast to watch.
8 of 10
A
★★★★ out of 4 stars
Thursday, January 12, 2023
NOTES:
2022 National Film Preservation Board:  1 win:  “National Film Registry”
The text is copyright © 2023 Leroy Douresseaux. All Rights Reserved. Contact this blog or site for reprint and syndication rights and fees.
-----------------------------------
------------------------------------
Amazon wants me to inform you that the affiliate link below is a PAID AD, but I technically only get paid (eventually) if you click on the affiliate link below AND buy something(s).
Posted by Leroy Douresseaux at 2:12 PM