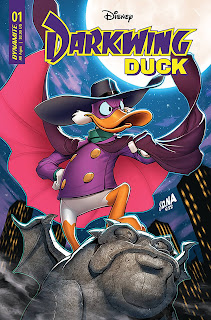 DARKWING DUCK VOLUME 1 #1
DYNAMITE ENTERTAINMENT
STORY: Amanda Deibert
ART: Carlo Lauro
COLORS: Carlo Lauro
LETTERS: Jeff Eckleberry
EDITOR: Nate Cosby
COVER: David Nakayama
32pp, Color, $3.99 U.S. (January 2023)
Rated “All Ages”
“Darkwing Duck in… The Dark Flight Returns”
“Darkwing Duck” was an animated superhero comedy television series produced by Walt Disney Television Animation.  It originally aired for three seasons (for a total of 91 episodes) from 1991 to 1992, both as part of the syndicated programming block, “The Disney Afternoon,” and as part of ABC's Saturday morning lineup.  “Darkwing Duck” focused on a suburban duck, Drake Mallard, and his superhero alter-ego, “Darkwing Duck.”  The character was a parody of the pulp fiction vigilante character, The Shadow, and his alter-ego, Kent Allard.
Over a 15-year period, beginning with Disney Comics in 1991, “Darkwing Duck” was adapted into comic books.  Disney Adventures Magazine published Darkwing Duck comics stories.  Marvel Comics, BOOM! Studios, Joe Books, and IDW Publishing also published Darkwing Duck comic books.  The current license holder is Dynamite Entertainment, and they are debuting Darkwing Duck Volume 1.  The series is written by Amanda Deibert; drawn and colored by Carlo Lauro; and lettered by Jeff Eckleberry.
Darkwing Duck Volume 1 #1 (“The Dark Flight Returns”) opens in St. Canard, the city hyper-vigilantly defended by the terror that flaps in the night, the ferocious fowl who plucks the evil eye from the face of foul play... Darkwing Duck!  Today, the city is unveiling a statue of their hero to honor him for all he has done to protect the city from evildoers.
However, one of those evildoers, the electrified villain, Megavolt, puts the shock on everyone, turning Darkwing Duck's adoring followers into followers that want to “get him!”  Can Darkwing Duck save the day?  With the help of his trusty sidekick, Launchpad McQuack, and his adorable adopted daughter, Gosalyn, Darkwing Duck just might be able to deliver a shock of his own.
THE LOWDOWN:  Since July 2021, Dynamite Entertainment's marketing department has been providing me with PDF review copies of some of their titles.  One of them is Darkwing Duck Volume 1 #1, the first Darkwing Duck comic book that I have read.
I have never watched an episode of the “Darkwing Duck” animated series, although I have always wanted to do so, nor have I previously read a Darkwing Duck comic book … although I have wanted to do so.  So it is with great pleasure that I tell you that I found pleasure in reading Darkwing Duck Volume 1 #1, my first Darkwing Duck comic book.
The work of artist-colorist Carlo Lauro here is quite good.  It reminds me of the kind of comic book art that readers would have found in Gladstone and Disney Comics back in the 1980s and 1990s.  Also, writer Amanda Deibert's story provides a nice, concise overview of the action, characters, and settings.
I hope that Dynamite can find success with this title and its other recent Disney release, Gargoyles.  There is an audience for these titles … if it can find them.
I READS YOU RECOMMENDS:  Fans of Darkwing Duck will want to try Dynamite's new Darkwing Duck comic book series.
A
Reviewed by Leroy Douresseaux a.k.a. "I Reads You"
https://twitter.com/DynamiteComics
https://www.dynamite.com/htmlfiles/
https://www.facebook.com/DynamiteComics/
https://www.youtube.com/channel/UCNOH4PEsl8dyZ2Tj7XUlY7w
https://www.linkedin.com/company/dynamite-entertainment
The text is copyright © 2023 Leroy Douresseaux. All Rights Reserved. Contact this blog or site for syndication rights and fees.
-------------------------
Amazon wants me to inform you that the affiliate link below is a PAID AD, but I technically only get paid (eventually) if you click on the affiliate link below AND buy something(s).
Posted by Leroy Douresseaux at 2:15 PM