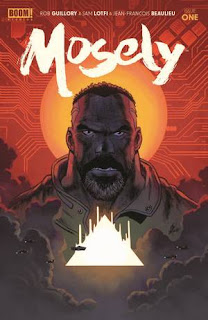 MOSELY #1 (OF 5)
BOOM! STUDIOS
STORY: Rob Guillory
ART: Sam Lotfi
COLORS: Jean-Francois Beaulieu
LETTERS: Andrew Thomas
EDITOR: Sierra Hahn
COVER: Sam Lotfi
VARIANT COVER ARTISTS: Sam Lotfi; Rob Guillory; Joe Palmer; Mike Huddleston; Jorge Corona with Sarah Stern; Mel Milton
24pp, Colors, 4.99 U.S.(January 2023)
Chapter One: “Phisher of Men”
Mosely is a new five-issue comic book miniseries from Rob Guillory, best known as the writer-artist of the comic book series, Farmhand (Image Comics), and the artist of the former Image Comics series, Chew.  Mosely focuses on a man who is on a mission from a higher power to destroy the “tech gods.”  The series is written by Guillory; drawn by Sam Lotfi (Harley Quinn); colored by Jean-Francois Beaulieu; and lettered by Andrew Thomas.
Mosely #1 (“Phisher of Men”) introduces Marvin “Mose” Mosely, a bitter old janitor working at a school full of technological enhanced elementary school children.  Thirty years earlier, Mose was part of “The Project,” which began as an idea to use technology to fix the world's ailing climate.
Now, the world of the later 21st century is hyper-technological, and it is ruled by the “Gods,” also known as the “Tech Overlords, the “Techno-Celestials,” and the “Machine Men.”  For the gift of “upgrades,” humans willingly surrendered to them.
After a violent encounter with an upgrade, Mosely gains the opportunity and the power to take down the “too big to fail” Tech Gods.  Can one man bring down the corporate powers who've used their vast influence to oppress an all too complacent human race?  Will Mosely win back the favor of his estranged family while he is setting mankind free?
THE LOWDOWN:  There is a line of tension and conflict in Mosely.  It is between the world that was and could have been afterwards and the world that is and the one to follow it.  Artist Sam Lotfi captures that struggle, embodying it in Marvin Mosely.  Lotfi conveys the bitterness in Mosely, but depicts it more as anger than as resignation.  Jean-Francois Beaulieu, the talented colorist on Rob Guillory's Farmhand, offers emotive colors that capture both the character of Mosely and the state of the world in which he lives.
The way Rob Guillory structures the story binds the past to the future.  What happens early in this chapter, “Phisher of Men,” lays the groundwork for the future.  The change in time and setting is jarring, but Guillory sets up the beginning so that, brief though it may be, we never forget the origins of Mosely current struggle.  The beginning defines Mosely's mission, and I think that Guillory realizes that it is important that the audience understands what was lost, despite all that the late twenty-first century people believe they gained.
So I am curious to see where Mosely is going.  Guillory and Lotfi have already added a bit of bite in the way that they present the future, and I suspect there is more to come because this noteworthy science fiction debut is also a satire.
I READS YOU RECOMMENDS:  Fans of science fiction comic books will want to try Mosely.
[This comic book includes an afterword by Rob Guillory.]
A
Reviewed by Leroy Douresseaux a.k.a. "I Reads You"
https://www.boom-studios.com/series/mosely/
Official comic trailer for Mosely: https://www.youtube.com/watch?v=YR-6cF1XX4s
https://robguillory.com/
https://www.instagram.com/rob_guillory/
https://twitter.com/boomstudios
https://www.boom-studios.com/wordpress/
https://www.facebook.com/BOOMStudiosComics
https://www.instagram.com/boom_studios/
The text is copyright © 2023 Leroy Douresseaux. All Rights Reserved. Contact this blog or site for reprint and syndication rights and fees.
-----------------------
Posted by Leroy Douresseaux at 1:47 PM