Review: "Women on the Verge of a Nervous Breakdown" is Still Fresh and Vibrant 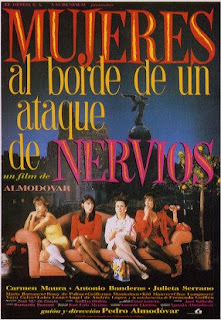 Mujeres al borde de un ataque de nervios is a 1988 Spanish comedy and drama film written and directed by Pedro Almodóvar.  The film is also known by its English release title, Women on the Verge of a Nervous Breakdown (the title I will use for this review).  The film focuses on a television actress who encounters a variety of eccentric characters as she tries to make contact with her lover who recently and abruptly left her.

Women on the Verge of a Nervous Breakdown introduces television actress, Pepa Marcos (Carmen Maura), who was recently dumped by her lover, Ivan (Fernando Guillen).  They are both voice actors who dub foreign language films into Spanish, and Ivan's sweet-talking voice is the same one he uses in his work.  Pepa knows that Ivan is about to leave on a trip … with another woman.  He has even asked Pepa to pack his things in a suitcase that he will pick up later.

However, Pepa just wants to talk to Ivan.  She really needs to talk to him, but he seems to be avoiding her.  She never catches him at home and leaves messages on his telephone answering machine.  He leaves voice messages on her machine, always seeming to call when she is unavailable.  Her life is spiraling out of control, especially as an ever increasing number of eccentric characters, some connected to Ivan, start gathering around her.  Their lives are apparently spiraling out of control, too.

There is her friend Candela (Maria Berranco), who is afraid of the police because she had a brief sexual encounter with a man who turns out to be a “Shiite terrorist.”  He later returned to her, bringing a few terrorists colleagues, and they are planning a terrorist attack.  Candela is more afraid of going to jail than having had a sexual relationship with a terrorist.

Ivan's son, Carlos (Antonio Banderas), arrives at Pepa's penthouse, with his snobbish fiancée, Marisa (Rossy de Palma).  They are apartment-hunting and are interested in Pepa's place.  Pepa meets the feminist and lawyer, Paulina (Kiti Mánver), who has a past with Ivan's family and may be connected to them now.  Carlos describes his mother, Lucia (Julieta Serrano), Ivan's previous lover, as “crazy,” and she is apparently out of her mental hospital and on the way to Pepa's for a confrontation.  Meanwhile, what is Ivan up to?

The original Spanish title of Women on the Verge of a Nervous Breakdown – Mujeres al borde de un ataque de nervios – is evidently not about a “nervous breakdown.”  The “ataque de nervois” is more about women showing excessive negative emotions via panic attacks, fainting, and bodily gestures when they get upsetting news or see something that disturbs them.  This is about agitation and stress instead of a full breakdown, which actually seems possible with some of the film's characters.

I can see why so many film critics, fans, and audiences were taken with Women on the Verge of a Nervous Breakdown at the time of its original release.  There was nothing like it in U.S. contemporary film at the time.  Its costumes, art direction, and set decoration have stylish references to the past and present and hints at the future.  If one ignores such things as the types of telephones and answering machines and the operation of the airport, the film does not seem to be set in any particular time, past or present.  The decorations in Pepa's penthouse and all the characters clothing are a riot of beautiful colors and color design.  However, things like the taxi cab that Pepa frequently uses and its lovable driver (Guillermo Montesinos) add an earthy street-level touch to the film.  Even Pepa's menagerie of animals (chickens and rabbits) are a nice addition to the film's oddness

For most of the 1990s, there were rumors of an American remake of Women on the Verge of a Nervous Breakdown, with Jane Fonda often listed as a potential cast member (as I remember it).  I am not surprised that American actresses would be attracted to this kind of film.  Even with Pepa as the lead, Women on the Verge of a Nervous Breakdown has five supporting female roles with significant speaking parts, to say nothing of a few smaller parts that all actresses to show themselves.

No one female character is like another, and each woman has her own reason for “ataque de nervois.”  Pepa and her eccentric friends and acquaintances are a delight, and the actresses make the most of their time on screen.  They turn their character types into showy, gaudy, and captivating women, and I wanted more of them.  Also, a young Antonio Banderas, as Carlos, deftly fits in with all these females, never dominating the screen, but always complimenting with uncanny skill.

Posted by Leroy Douresseaux at 12:43 PM