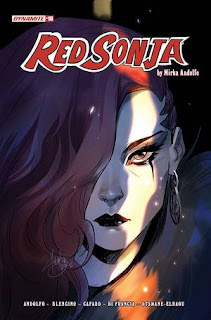 Dynamite Entertainment is now the publisher of Red Sonja comic books.  One of the recent titles, Red Sonja Volume 6, is under the guidance of popular Italian comic book creator, Mirka Andolfo.  It is written by Andolfo and Luca Blengino; drawn by Giuseppe Cafaro; colored by Chiara Di Francia; and lettered by Hassan Otsmane-Elhaou and Jeff Eckleberry.  In this new series, Red Sonja accepts the bounty to bring a girl named “Sitha” to a broker who will send her to her true home (Kithai).  The girl, however, becomes attached to Sonja and calls her mother and an adventure begins.

Red Sonja Volume 6 #10 opens on a strange island on the “Sea of Vilayet.”  Sonja and Captain Eustachius Krancher, the pirate, search for the missing Sitha.  Meanwhile, the traitorous Captain Beylab of “Derketo's Eye,” upon which Sonja and Sitha sought passage, reveals his true plans.  Can he awaken a dead god?

And what part does Xamul – the demigoddess of fire, wind, and fury that now resides inside Sitha – play in this?

THE LOWDOWN:   Since July 2021, the marketing department of Dynamite Entertainment has been providing me with PDF review copies of some of their titles.  One of them is Red Sonja Volume 6 #10 which is the latest of several Dynamite Entertainment Red Sonja comic books that I have read.  This is also only the twelfth issue of a Mirka Andolfo comic book that I have read.

Andolfo and Luca Blengino have shifted this story into an old-fashioned sword and sorcery adventure, full of magic, mysticism, strange lands, and stranger creatures.  This current story arc, which runs over parts of three issues, feels like a mystical Robert E. Howard tale, the kind adapted into comics by the great writer-editor, Roy Thomas.  This is a treat to read, and it prepares us for the next big arc, which may bring our heroes to their destination.

This issue, artist Giuseppe Cafaro creates silvery and dreaming storytelling to capture the surreal setting.  Cafaro also continues to capture the sense of magic that infuses this series, making this a Red Sonja comic book worth following.