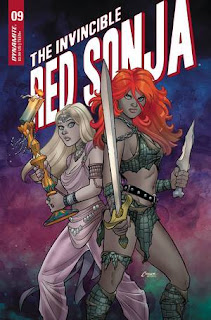 In 2005, Dynamite Entertainment began publishing comic books featuring differing versions of the character.  One of those is The Invincible Red Sonja.  It is written by Amanda Conner and Jimmy Palmiotti; drawn by Moritat; colored by Matt Carter and Sal Monoco; and lettered by Dave Sharpe.  In this series, Red Sonja is joined by the wing Tuma; the dispossessed Prince Ederik and Princess Zaria; and the Darklanders, Rok and Kai.

The Invincible Red Sonja #9 opens in the city of Capellia.  Awaiting Sonja there is the living god, Tezzah, who has ruled for over a thousand years.  Now, she is in this god's arena to fight her monstrous son.  But if she defeats mother and son, Sonja will have a kingdom on her hands.  What will this mean for Tuma, Ederik, Zaria, Rok and Kai?

THE LOWDOWN:  In July 2021, Dynamite Entertainment's marketing department began providing me with PDF review copies of some of their titles.  One of them is The Invincible Red Sonja #9, which is the sixth issue of the series that I have read.

Under a beautiful cover by artist Amanda Conner and colorist Paul Mounts, The Invincible Red Sonja moves towards its likely end.  Conner and her co-writer Jimmy Palmiotti presents a big prize in front of Red Sonja.  It is a tempting one, and a prize many would collect.  This series always finds a way to grip the readers even as the locales and plots change.  I look forward to whatever comes next.