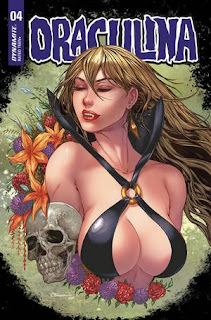 Now, Dynamite Entertainment has given Draculina her own comic book series, Draculina Volume 1, a spin off of the comic book series, Sacred Six.  It is written by Sacred Six writer, Christopher Priest; drawn by Michael Sta. Maria; colored by Ivan Nunes; and lettered by Willie Schubert.  The series focuses on Draculina, a woman who finds that she is of two natures, and one wants revenge on everyone who ever did her wrong, including that pesky other identity, a girl named “Katie.”

Draculina Volume 1 #4 (“Theogony”) opens on Rodeo Drive, Beverly Hills, California.  Katie finally has a meeting with Belial, also known as the mob boss, Giordano “Gio” Basci.  The bastard has also tipped off Draculina's jilted lover, and now she finds herself hunted by the “Reality Merchant,” Draculina's “husband” via an arranged marriage.

And yes, he can alter reality, and Katie is about to discover that unpleasant … reality.  That also includes everyone associated with Katie and Draculina.

THE LOWDOWN:  Since July 2021, the marketing department at Dynamite Entertainment has been providing me with PDF review copies of some of their titles.  One of them is Draculina Volume 1 #4, which is the fourth time I've read any story involving this character.

What a delightful series Christopher Priest has fashioned in Draculina.  It is one of the best trippy, time-spanning, dimension-hopping comic books that I have ever read.  Priest has also created a cast of delightful characters, and their engaging personalities keep the series grounded.

I READS YOU RECOMMENDS:  Fans of Vampirella characters and of writer Christopher Priest will want to try Draculina Volume 1.