Comics Review: "KING SPAWN #11" - It's Hard Out Here for a Hellspawn Pimp 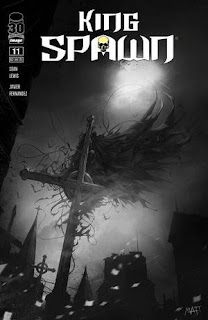 King Spawn is one of three recently launched comic book series that join the original series to form the “Spawn Universe.”  This series is written by Sean Lewis with Todd McFarlane; drawn by Javi Fernandez with Thomas Nachlik ; colored by FCO Plascencia; lettered by Andworld Design.  King Spawn finds Spawn battling the members of a dark conspiracy that wants to force him to accept his crown and the “Godthrone.”

King Spawn #11 opens with Spawn beating the crap out of a member of the Court of Priests.  The demon, Tremor, however, isn't Spawn's only target, but some of his targets will fight back.  Spawn is on the hunt for the Court of Priests, and maybe they expected it.  Meanwhile, Al Simmons/Spawn's oldest friend, Terry Fitzgerald, is on a mission of his own, one that may actually make things worse!

THE LOWDOWN:  King Spawn insists on being the best Spawn spin-off comic book to date, and I'm too scared of it to argue otherwise.  As I have written several times, this hybrid of dark fantasy, the supernatural, and superheroes never disappoints.

I love that writer Sean Lewis is just a little too aggressive because that feels like the right thing for the lead character.  This is a Spawn comic book, after all, and the character has often seethed with and anger, discontent, and rage.  Besides, Lewis has been offering a nice balance of character drama with Terry Fitzgerald.  He is the human side, vulnerable, but determined, a counter to the rage.

Once again, Javi Fernandez turns in some of best work.  It's the eleventh issue, for Hell's sake, but Javi is still offering crazy new compositions and invigorating graphics.  Fernandez balances the grim determination of Terry Fitzgerald with the hurricane of violence that is Spawn.  I loved how Javi drew Spawn pounding Tremor into crap in page after page of widescreen comics storytelling.

I highly recommend King Spawn.  To borrow a phrase from Joe Simmons of the Madea movies, King Spawn is some of that “good-good,” although Joe is talking about narcotics...