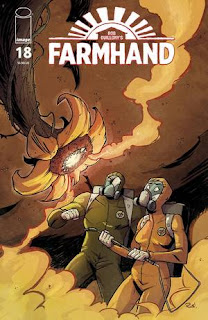 Set in and around Freetown, Louisiana, Farmhand focuses on the Jenkins family: Ezekiel “Zeke” Jenkins; his wife, Mae; their children, Abigail and Riley; Zeke's father, Jedidiah “Jed” Jenkins; and sister, Andrea (“Andy”).  Once upon a time, “Jenkins Family Farmaceutical Institute” used stem cell biotechnology to grow plant-based replacement human organs and tissue.  Once upon a time, transplant recipients saw this as a miracle.  Now, Zeke and the rest of the world see the miracle as a curse.

Farmhand #18 (“Allergy Season”) opens in the wake of the shocking ending of Zeke's confrontation with the crazy old man, Joe Thibodeaux.  That was followed by Zeke's horrifying conversation with Monica Thorne.

Now, Zeke is full of secrets to keep, but his wife, Mae, ain't having it.  There is something worse afoot, however, waiting for Mae at work.  She is about to meet the nastiest couple outside of reality television, “The Pollinators.”  Plus, Riley becomes a budding comic book creator.

THE LOWDOWN:  It seems that in the two years since the publication of Farmhand #15, Rob Guillory may have used that time to really think about Farmhand.  The series has gone from being exceptional to being unbelievably great.  Guillory's art – the design and compositions – remains dynamic and imaginative.

The part of Farmhand's creative process that has really exploded is the writing and scripting.  There are many elements in this story that should come across as ludicrous, but Guillory has so thoughtfully developed the concepts, plot, and narrative that make up Farmhand that even the looniest twists and turns and reveals make perfect sense in this context.  Not only that, but they also delight and entertain.  I find myself enjoying even the brutal killings, which might say more about me than about Guillory's prodigious graphical storytelling chops...

Yes, the collaborators – colorist Jean-Francois Beaulieu and Kody Chamberlain – are still humming.  So your harvest of comic books should include Farmhand … if you really mean it when you say that you want “good comics,” dear readers.

I READS YOU RECOMMENDS:  Fans of dark fantasy fiction and of great comic books will want to be a Farmhand.