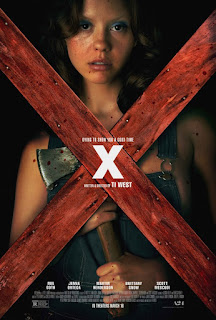 X is a 2022 horror film written and directed by Ti West.  The film focuses on six people who are filming a pornographic movie on an elderly couple's rural Texas property, unaware of the danger that is so near to them.

The group arrives at a reclusive farm that belongs to an elderly couple, Howard (Stephen Ure), and his wife, Pearl (Mia Goth).  Wayne has rented the couple's guest house where he intends to shoot his pornographic movie.  When the elderly couple discovers what Wayne and his friends are doing in the guest house, the killing starts.

One thing that really surprises me about X is how good the acting is.  The cast really gives good performances, and each performer has at least a few chances to shine individually.  Martin Henderson basically makes his character, Wayne Gilroy, into a pastiche or parody of Oscar-winning actor and famous Texas citizen, Matthew McConaughey.  Mia Goth plays dual roles, Maxine and also Pearl (which I suspected before I saw the credits).  Goth is quite good as Maxine, creating subtle shades and textures for the character.  Although Pearl does have her moments, I don't like the old “psycho-biddy” as much as I like Maxine.

Anyone familiar with director Tobe Hooper's classic American film, The Texas Chain Saw Massacre (1974), will see that it obviously influenced director Ti West's X.  The latter is not a copy of the former, however; X mainly has a similar physical setting (deep in rural Texas) and is set close to the same time as the earlier film (the 1970s).  At the center of the story of both films is a mysterious farmhouse that radiates unease.

I see elements of Alfred Hitchcock's legendary film, Psycho (1960), an obvious influence on Tobe Hooper's film, if for no other reason than having similar origin narratives.  Watching X, films like The Last House on the Left (1972) and Boogie Nights (1997) also come to mine.

That is where the similarities end, more or less.  The Texas Chain Saw Massacre was like a folk tale, a regional tale of terror handed down across generations.  It is also an allegory representing the state of an America coming out of the 1950s and 1960s – post-industrial and post-Vietnam.

At the heart of X is the battle of youth versus aging as a theme – Howard and Pearl against the pornographers.  That is not the only observation I made about the couple.  I don't know Ti West or  his politics, but I see Howard and Pearl as bigoted, bitter, resentful, and jealous.  Unfortunately, they have lived long enough to see their kind of people, their beliefs, their culture, and their society become irrelevant, if not outright forgotten.  If they lived today, Howard would be the angry old cracker, and Pearl would be the snarling old biddy at a Trump rally.  Howard and Pearl are MAGA, but their enemies aren't “Mexican rapists” and trans kids.  Their enemies are people still in the prime of their sexual power and prowess, who flaunt their bodies and their sex acts.  Howard hates men who can get an erection that won't kill them, and withered-old Pearl resents young women, with their firm bodies that attract horny men.  Yes, I do feel a little sorry for them … very little.

In the end, however, I do want to recommend X as a horror movie.  Ti West has made the kind of wet, hot, American slaughter-fest of a film that American filmmakers make best.  I will say that although it feels a bit longish, X's story also feels a bit underdeveloped.  I think a horror movie about a group of people making a porno movie on a farm belonging to possible serial killers could have been more … or maybe I expected more or something different.  Still, I like X just because, for all its obvious influences, it seems so crazy and so different.

Posted by Leroy Douresseaux at 1:31 PM