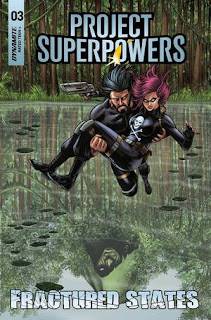 Project Superpowers: Fractured States Volume 1 #3 opens in the “Zombie State,” in the year 2052.  Aboard her jet-propelled boat, Bobbi, the new “Black Terror,” tells John Doe what happened to America in the twenty-first century.  It all started in 2025...

At last, the secrets are revealed.  The origin of the new Black Terror is told.  John Doe learns how the United States of America fractured into warring powers.  In the middle of it all, the mysterious John Doe holds the key to what happened, and why the heroes of Project Superpowers failed.  Now, in the year 2052, can he gather the survivors and save America?

THE LOWDOWN:  In July 2021, Dynamite Entertainment's marketing department began providing me with PDF review copies of some of their titles.  One of them is Project Superpowers: Fractured States Volume 1 #3, which is the third Project Superpowers comic book that I have read.

Writers Ron Marz and Andy Lanning are writing a spectacular superhero comic book.  This blend of superhero fantasy, mystery, conspiracy, and science fiction is shockingly good.  I was surprised at how good the first issue was; now, I'm just dumbfounded by the third issue.  Project Superpowers: Fractured States Volume 1 is proof that writers that know what they are doing can create a plot-driven narrative that is great without being bogged down in dull psychological drama.  Does Dynamite have other superhero properties for Marz and Lanning to write?

I don't want to leave out artist Emilio Utrera; he is turning Marz and Lanning's scripts into addictive graphical storytelling.  Utrera captures the spirit of classic, old school superhero comic books filled with a sense of discovery and wonder.  Arthur Hesli's moody colors create an alluring world of mystery and thrills.  Of course, a superb superhero comic book needs a superb comic book letterer, and of course, that is Tom Napolitano.

I am writing this review in a state of nerd ecstasy.  Please read, Project Superpowers: Fractured States Volume 1, dear readers.

Posted by Leroy Douresseaux at 4:03 AM