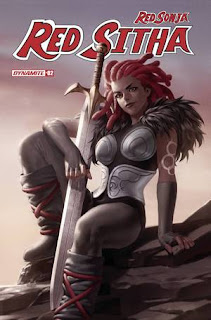 Now, Sitha is “Sitha the Red,” and she is the star of her own comic book series, Red Sitha.  It is written by Andolfo and Luca Blengino; drawn by Valentina Pinti; colored by Chiara Di Francia; and lettered by Jeff Eckleberry.  The series focuses on Sitha the Red, the adopted daughter of Red Sonja, now a decade older and a bounty hunter in the Kingdom of Aquilonia.  That is until someone from her past involves her in a suicide mission.

Red Sitha #2 opens in the Eastern Desert.  Sitha had met Kildrick, the priest who is apparently her brother, and he says that their parents have been kidnapped.  Now, the two have entered the magical oasis kingdom of “Azul-Amon.”  The kingdom is in a state of jubilation, but it is also the place where they may learn the whereabouts of the “Living Necropolis.”  This is where Shefru-Sobek, the man who kidnapped their parents, are holding them.

Sitha and Kildrick must find “the Sand Astrolabe,” a magical artifact that will show the way to where their parents are being held.  Finding it, however, turns out to be a bit more complicated than they thought – comical – but complicated.

THE LOWDOWN:   In July 2021, Dynamite Entertainment's marketing department began providing me with PDF review copies of some of their titles.  One of them is Red Sitha #2.

After two issues, I must say that Red Sitha is a really good comic book – a freaking good comic book.  Writers Mirka Andolfo and Luca Blengino have created a Red Sonja-like comic book series, but without the “mythology” (baggage) of Sonja.  Thus, the series and the title character feel fresh, although she and her adventures are set in the world of Sonja.

Artist Valentina Pinti is delivering some killer art and the result is rich storytelling of shifting moods and attitudes.  Pinti makes Red Sitha feel more like a swashbuckling adventure with Persian flourishes instead of being more sword and sorcery.  Colorist Chiara Di Francia's bright colors strike the right mood, even making the story feel like a sexy romp.  Jeff Eckleberry's letters gently carry the story along on its surreal path.

I am pleasantly surprised by Red Sitha, and I hope it is around for awhile.  Dear readers, I highly recommend that you get in on this series now.

Posted by Leroy Douresseaux at 2:01 PM