Review: "LICORICE PIZZA" is a Dumb Title for a Freaking Fantastic Film 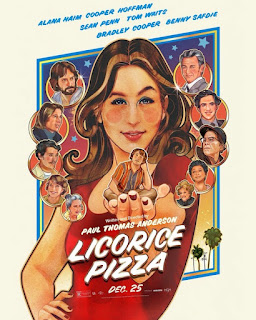 Licorice Pizza is a 2021 coming-of-age comedy and drama and period film written and directed by Paul Thomas Anderson.  The film focuses on the adventures and misadventures of a teenage boy and a 20-something young woman as their romantic relationship develops.

Licorice Pizza is set in San Fernando Valley, California, circa 1973.  The film introduces 15-year-old Gary Valentine (Cooper Hoffman), a child actor.  While preparing for “picture day” at his high school, Gary notices the photographer's assistant, Alana Kane (Alana Haim).  Gary is smitten with her and strikes up a conversation, but Alana, who says that she is 25-years-old (although she could be as much as 28-years-old), tries to rebuff him, to no avail.

A kind of romance begins while Gary becomes a budding teenage businessman and while Alana tries to get her life together.  This version of “first love,” however, involves a treacherous navigation as both are attracted to other people.  This includes other teen girls for Gary and actors and politicians for Alana.  Meanwhile, there is an entire San Fernando Valley of adventures to be had and some growing up to do.

The Los Angeles Times described Licorice Pizza as a “family-and-friends-project” because much of the cast of the film is made up of Paul Thomas Anderson's family and friends.  The lead actor, Cooper Hoffman, is the son of the late actor, Philip Seymour Hoffman, who appeared in several of Anderson's films.  A former local restaurant that Anderson patronized is recreated for the film.  Living and deceased Hollywood celebrities appear as characters in the film, including legendary television star and studio executive, Lucille Ball, and film producer, Jon Peters.  Gary Valentine and his adventures are based on the life of former child actor turned film and TV producer, Gary Goetzman, a friend of Anderson's and the producing partner of actor Tom Hanks.  The film even takes its title from, “Licorice Pizza” (1969-85), a former Southern California record store chain that, through sales and acquisitions, became part of the “Musicland” brand.

Thinking about Licorice Pizza, I can only regard it as perfect, and I feel that its perfection comes from the fact that the concept, plot, story, setting, and characters come from a place of love and of familiarity for Anderson.  Everything feels natural and real, and there were instances when I was watching this film that it felt like I was staring through a window in time at something that had actually taken place.

To me, Anderson's screenplay is perfect down to the punctuation and indention.  To change it would be to ruin it.  Even the soundtrack is filled with songs that seem as if they were recorded long ago, but were always meant for Licorice Pizza.

Gary Valentine and Alana Kane (love those names) are so well-developed and so naturally developed that I found myself loving them, being annoyed at them, and being worried for them – as if they were my own charges.  As Gary, Hoffman gives one of the best performances of a teenage character that I have ever seen.  Alana Haim is Meryl Streep and Glenn Close good as Alana Kane, and her not receiving an Oscar nomination for this performance is artistic theft.

Well … I love this film, and I demand that you watch it.  Or I'll beg if that's what it takes.  The lives of white kids in 1970s San Fernando Valley is a star system away from when and how I grew up.  Still, I could feel that era and the lives of these people in my heart.  Honestly, Licorice Pizza is a stupid-ass title for a stupendous-ass film.  If the title is what is holding you back from seeing it, ignore that title and see one of the truly great films of the last several years.

Posted by Leroy Douresseaux at 1:05 PM