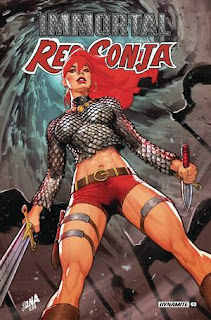 In 2005, Dynamite Entertainment began publishing comic books featuring differing versions of the character.  The latest is Immortal Red Sonja.  It is written by Dan Abnett; drawn by Emiliana Pinna and Alessandro Miracolo; colored by Luca Colandrea and Ellie Wright; and lettered by Jeff Eckleberry.  The series is set in the Britain of legend and finds Red Sonja (“Sonja the Red”) in possession of two cursed items – a soul-possessed chain mail and an accursed blade (“Gwynbur”). Neither will let her go until she saves the fallen, lost kingdom of “Logres.”

Immortal Red Sonja #3 (“The Magician's Tower”) opens in Logres.  Sonja is kicking some mountain ogre ass, and though she is loathe to admit it, the cursed accoutrements are helping her.  But this is what she has to do reach “the Tower of the Magician.”

Now, it's time to meet Merlyn, right?  Not if one of the primordial titans, a “magog” known as “Gog,” has anything to say about it.

THE LOWDOWN:  In July 2021, Dynamite Entertainment's marketing department began providing me with PDF review copies of some of their titles.  One of them is Immortal Red Sonja #3, which is one of many, many Dynamite Red Sonja comic books that I have read.

Immortal Red Sonja is Dan Abnett's spin on the Arthurian legend, with Red Sonja being the spin.  It is both imaginative and alluring.  With this third issue, however, Abnett moves the narrative forward, while also giving artist Alessandro Miracolo an opportunity to show off his skill at composition and design.  Immortal Red Sonja is a comic book widescreen adventure with big panels and spreads conveying the battle action.

This is an impressive union of a writer and an artist producing a big adventure and even bigger action comic book.  Don't miss Immortal Red Sonja.

Posted by Leroy Douresseaux at 3:16 PM