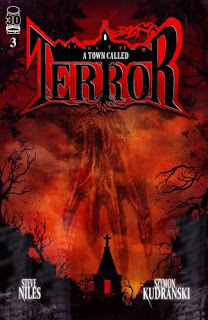 A Town Called Terror is a new comic book series from writer Steve Niles and artist-colorist Szymon Kudranski.  Published by Image Comics, the series blends the genres of crime and horror fiction and is set largely in a town of monsters and freaks.  Letterer Scott O. Brown completes the creative team.

In a town called “Terror” (population 1300), a great man has just come back from the dead – apparently not for the first time.  His son, Henry West, has also just been kidnapped to Terror, his hometown, by request of his father.  Meanwhile, his wife, Julie, knows very little of the circumstances surrounding her husband's disappearance, only that her husband has been kidnapped.

A Town Called Terror #3 (“Transformation”) opens in a town called Terror.  Henry has just been reunited with his younger brother, Scott, one of a set of twins.  Henry has also pissed off the “Franks,” so when they retaliate, we finally get to see what makes Henry a monster.  Meanwhile, Julie is getting help from a sympathetic detective who has found something regarding the disappearance of Henry.

THE LOWDOWN:  Steve Niles may be the most famous writer of modern American horror comic books, with 30 Days of Night from IDW Publishing being his best known work.  Artist Szymon Kudranski has made his rep on several titles, especially on Image Comics titles, Spawn and and Nita Hawes NIGHTMARE Blog.

A Town Called Terror is something they have created together, and if things work out correctly, it could be special.  Niles has been slowly playing out the secrets of the town of Terror and its denizens.  The reveal of Henry's powers is a nice surprise and will likely convince readers that Henry is capable of the great task his father plans to place before him.  Hopefully, more details are imminent.

Kudranski's art and storytelling remains a sexy mix of Film-Noir and of shadowy Gothic elements.  It flows like a dark fluid, seeping into my imagination, and I imagine it could do the same to yours, also, dear readers.  This is an alluring and beautifully drawn horror and dark fantasy comic book.