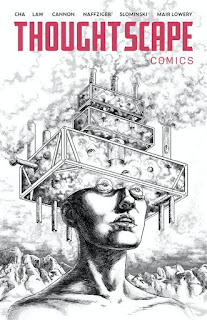 Lowery has stated that each issue of ThoughtScape Comics will contain 44+ pages of content, featuring stories written by Lowery and drawn by up-and-coming comic book artists.  Some of the stories will be self-contained and others will be part of a serial.  Multimedia artist, John Larsen, will provide the graphic design and packaging for each issue.

ThoughtScape Comics is set in a world in which humanity's first multi-planet conglomerate, LifeTech, discovered the “ThoughtScape” in the late 21st century.  The ThoughtScape is a fifth dimension where every thought that has ever been thought exists.  Using technology of its own innovation, LifeTech began isolating and monitoring these thoughts (via “ThoughtScape Listening Posts").

Later, LifeTech began capturing and recording these thoughts through Thought & Information Service Collection Officers (TISCOs).  Eventually technological advancements allowed that the entire “ThoughtLives” of both living individuals and of the long-dead could be virtually reconstructed and played back through a variety of media formats.  The stories of ThoughtScape Comics will focus on the designs and intentions of LifeTech; the nature of ThoughtScape; and how people and beings connect, react, and exist with both.

THE LOWDOWN:  For the review of ThoughtScape Comics #1, I will offer comments on each of the four stories individually.

The first story is “Thoughtscape 2319: Parish, The Thought . Part 1,” the first part of a serial.  It is written by Lowery and drawn by Dave Law.  The story takes place at the edges of the galactic frontier in the year 2319.  Week 32.4, Thought & Information Service Collection Officer (TISCO) Odessa Query patrols her beat, currently the Hen 3-593 Di Chamaelontis System – 700 light years from Earth.

Her TISCO ship collects thoughts from ThoughtScape Listening Post Di.Cha.036, while she entertains her ship's neurocorder, Feyla.  Query prepares to move on to her next assigned Listening Post when she is diverted to an ongoing disaster.

Because of its cliffhanger ending, I am excited to read more of this story, especially because Lowery teases something awesome and awful coming to scare us, dear readers.  Dave Law's drawing style is perfect for science fiction comic books, and the design of the characters and the technology are convincing.  I also like Law's impressive title page drawing (for which I wouldn't mind having the original art).

The second story is “A Spy Without A face,” illustrated by Tyrell Cannon.  The story pits a mysterious “spy without a face” against a pack of assassins who have broken into a mysterious LifeTech facility.  Both sides get more than they bargained for in this black and white tale.

Cannon's graphical storytelling is high-speed and hyper-kinetic with the graphic design sensibilities of science fiction anime and manga.  Lowery's story allows Cannon to draw an explosive tale that is visceral and thrilling.  I'd like to see another Lowery-Cannon creation, and this story also made me seek out more information about Tyrell Cannon. 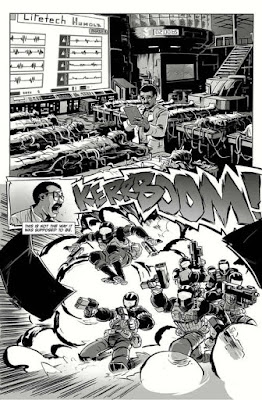 [Art by Tyrell Cannon for the story, "A Spy Without A face."]

The third story is “Adorable Orphans,” written by Lowery and drawn and colored by Lisa Naffziger.  Sally, an elementary school-age girl, loves her “Grammie,” her grandmother.  Her parents seem to despise the old woman, and they are particular about the things to which Grammie exposes Sally.

One day, Sally gets a package from Grammie.  Inside is the season’s hottest toy trend, one of LifeTech’s “Adorable Orphan android dolls” (also called a “DollDroid”).  The girl DollDroid's name is Betty, and she is a great friend for Sally, but everyone else better watch out.

“Adorable Orphans” is by far the best story in ThoughtScape Comics #1.  It is straight-forward, but Lowery is sly and sneaky in the way he surprises the readers in unexpected ways.  For instance, Sally's parents are both snobby and vulgar.  What's going on with Grammie?  And there is certainly more to Sally than what appears on the surface.

Lisa Naffziger's compositions and coloring are more alt-comics than children's comics, although I can understand why some people would see her work as the latter.  Lowery and Naffziger have created in “Adorable Orphans” a concept that could live on its own outside the world of ThoughtScape Comics.  If I were in Hollywood film and television production, I'd swoop in and buy the media rights for “Adorable Orphans” away from the rest of this package.

The fourth and final story is “Ex Post Facto: A Dash Varrick Misadventure . Part 1.”  A press release from Lowery describes the story in the following way:

The art by Karl Slominski has elements that remind me of David Mack, especially, and of Bill Sienkiewiz, a little.  Otherwise, I have no idea what's going on with this story.

Overall, I like ThoughtScape Comics #1.  It presents such an expansive science fiction concept with a universe of possibilities as big as anything offered by the Star Wars and Star Trek franchises.  I hope a lot of comic book readers get behind the project and financially support it, which they did via Kickstarter. [UPDATE]

I READS YOU RECOMMENDS:  Fans of science fiction anthology comic books (such as 2000 AD) will want to try ThoughtScape Comics.

Amazon wants me to inform you that the link below is a PAID AD, but I technically only get paid (eventually) if you click on the ad below AND buy something(s).  But that ad is for a graphic novel you might want to give a try.

Posted by Leroy Douresseaux at 6:52 PM