Comics Review: NOCTERRA #2 is a Blast to Read 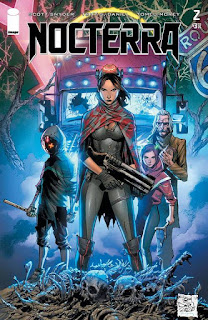 Nocterra is a new comic book series from writer Scott Snyder and artist Tony S. Daniels.  Published by Image Comics, Nocterra is set on an Earth that has been experiencing an everlasting night, the “Big PM,” when the sky went dark and the world was plunged into an everlasting night, for well over a decade.  Colorist Tomeu Morey and letterer Andworld Design complete the series' creative team.

Nocterra introduces Valentina “Val” Riggs – call sign “Sundog.”  She was in the fifth grade the day the “Big PM” occurred.  Any living organism left unlit in the dark for more than 10 hours starts undergoing a biological transformation and changes into a monstrous version of itself, becoming something called a “Shade.”  This is happening to her brother, Emory “Em” Riggs.

Thirteen years later (“13 PM”), Val drives a big rig hauler, a heavily-illuminated 18-wheeler known as the “Sundog Convoy.”  A skilled “ferryman” Val transports people and goods along deadly unlit roads between the few remaining human outposts, and now she has her most dangerous haul – a mysterious man and his granddaughter.

Nocterra #2 opens with Val remembering the early days of the “Big PM,” when her parents were lying to themselves.  Val believes in putting a fist through childish fantasies and through the lies people tell themselves.  So what will she do now that Em is infected, and his transformation into a Shade seems to be happening faster than it should?

Meanwhile, she forces the old man, Dr. Augustus McCray, to tell her the truth, or at least more, about the purpose of his journey.  Val also discovers that “Blacktop Bill,” someone thought to be no more than a ghost story, is chasing her.  What does he want?

THE LOWDOWN:  I enjoy Scott Snyder's creator-owned series more than I enjoy his recent work for DC Comics.  I find all that Dark Nights: Metal stuff mostly unreadable, but I enjoyed Wytches (2014-15).  I am usually happy to read a comic book drawn by Tony S. Daniels, going back to his early days writing and drawing creator-owned titles at Image, such as The Tenth.

I found Nocterra #1 to be a strong first issue because it offered so much background information about the story.  Snyder did keep a lot of secrets, but he gave readers a clear understanding of the basics when it came to Nocterra's lead character, the setting, and the plot.  Still, I wondered if the first issue was a fluke, but, now, I know that I had nothing to worry about.  Nocterra #2 is a fine example of pop comics storytelling, with riveting subplots, a poignant flashback, some important character development, and some wham-bam action.

Tony Daniels' art is not as subdued as it was in the first issue.  The storytelling surges, and even the character moments hop with kinetic energy.  Colorist Tomeu Morey is very important to this narrative, and his colors offer subtle shifts in nightmare world.

I won't hesitate this time.  Nocterra #2 makes me confident that this series is one to follow.  If you are budgeting, dear readers, drop something else to make sure you enter the world of Nocterra every chance you get.

[This comic book includes a four-page preview of “The Good Asian #1” by Pornsak Pichetshote and Alexandre Tefenkgi.]

Posted by Leroy Douresseaux at 6:09 AM