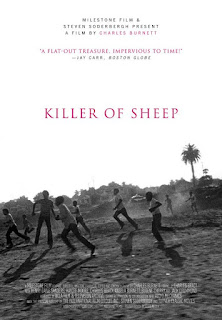 Killer of Sheep is a 1978 film drama from writer-director, Charles Burnett, who also produced, photographed and edited the film.  Burnett shot Killer of Sheep on 16mm black and white film, and he filmed it mostly on weekends in the Watts neighborhood of southern Los Angeles in 1972 and 1973.  He originally submitted the film to the UCLA School of Film in 1977 as his Master of Fine Arts thesis.  Set in Watts, Killer of Sheep focuses on a slaughterhouse worker who suspends him emotions to continue working in such a job, but ends up have little sensitivity for the very family in which he works so hard to support.

Killer of Sheep premiered at the Whitney Museum of American Art in New York on November 14, 1978.  It did not receive a general theatrical release because Burnett has not secured the rights to the music he used in the film.  Over the years, however, people were apparently able to see the film at small film festivals, on the college film circuit, and via bootleg copies.  It was inducted into the “National Film Registry” in 1990, the second year of the registry.

In 2007, a group of interests, including the UCLA, Steven Soderbergh, and Milestone Films, worked to purchase the music rights and to restore Killer of Sheep to 35mm film.  It received a limited release in late 2007 and several “Top 10” lists, including being chosen the best film of the year by Ed Gonzalez of Slant Magazine.

Killer of Sheep is a depiction of the urban Black Americans of Watts as seen through a series of loosely connected vignettes.  If the film has a focus, it is on Stan (Henry G. Sanders), a husband and father who works at the slaughterhouse, Solano Meat Co., where he helps process sheep for slaughter.  Stan finds the monotonous work to be repugnant, and he seemingly suspends his emotions to deal with the job.  The result is that his home life suffers.  He shows little sensitivity to his unnamed wife (Kaycee Moore) and to his two children, son (Jack Drummond) and daughter (Angela Burnett).  Stan has trouble sleeping, does not play with his children, and avoids sex with his wife, who wants intimacy and real affection from her husband.

Stan wants another job, and he often finds himself caught up in the schemes and plots of friends and associates.  Stan and his friend, Bracy (Charles Bracy), attempt to buy a car engine from a squabbling family.  Two fast-talking acquaintances want Stan to help them in their plot to murder a man.  All the while, a portrait of the austere and impoverished life of poor and working-class African-Americans emerges.  Can Stan better his life even if he feels unable to affect the course of his life?

I have previously seen two of Charles Burnett's films, To Sleep with Anger (1990) and The Glass Shield (1994).  I had not heard of Killer of Sheep until its surprise inclusion in the list of films inducted into the 1990 class of the National Film Registry.  I have been putting off seeing the film for years since the DVD release of the 2007 restoration and limited theatrical run.

Burnett made Killer of Sheep with nonprofessional actors, reportedly a nod to the influence of “Italian neo-realism.”  I can't say exactly as I have never seen such a film.  I also would not describe Killer of Sheep as having a documentary feel.  The film's loose collection of vignettes have informal story acts, although the film does not have a plot.  Burnett provides the slimmest character development and something like a narrative, but the actors are quite convincing in their portrayals.  I found myself fascinated by the way they sold the idea that they are indeed playing characters and that they made those characters seem real.  Henry G. Sanders makes Stan the solid center of Killer of Sheep.

Killer of Sheep indirectly speaks to the economic exclusion and segregation faced by black people in Watts then and for decades.  Stan, his family, and their friends and neighbors are always short of money and resources and hope.  Still, their lives are filled with moments of happiness and joy, and they make good times out of whatever they can.  There are also moments of beauty, such as when Stan's daughter sings an Earth Wind & Fire song to her doll while her mother (Stan's wife) watches.