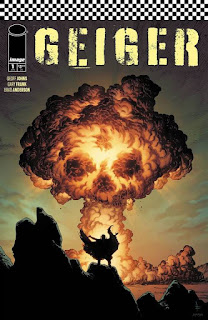 Geiger #1 opens 20 years after the nuclear war known as the “Unknown War” ravaged the planet, turning Earth into a dying world.  In the state of Nevada, desperate outlaws battle for survival in a world of rapidly disappearing resources and supplies.  But there is still time for myths and legends.

In the wasteland that was Boulder, Nevada, there is man even the most fearsome avoid.  People have given him a multitude of nicknames:  Joe Glow, The Meltdown Man, the Monster of Boulder City, the One Who Walks Outside Without a Suit, the Walking Bomb, and the Man of Mass Destruction, to name a few.  But before the war, he was simply a man named Tariq Geiger.  So who or what is Geiger, now?

THE LOWDOWN:  As first issues go, Geiger #1 is mostly an introduction, kind of like a prologue.  This first issue introduces the title character, Geiger, giving readers a look at who he was in the past and a glance at who he is now.

Honestly, Geiger #1 isn't Geoff Johns or Gary Frank's best work, but it is intriguing.  One has to consider what they have done as a creative team, such as the recently acclaimed Doomsday Clock, a sequel (of sorts) to Alan Moore and Dave Gibbons' legendary comic book, Watchmen.  So Johns and Frank are not going to deliver “perfect ten” comic books every time they drop a new issue or graphic novel.

Frank's pencil art is rougher and less refined than his usual work, which is a good thing here.  It is as if Frank is letting readers now that Geiger isn't some superhero fast food or dessert.  Frank's compositions and graphical storytelling are edgy and bleak, and it all looks like he is indicating that he is embarking on something quite different from past works.  To go along with this, colorist Brad Anderson offers earthy tones instead of his usual bright superhero comics colors.

Writer Geoff Johns seems to be mixing genres in the creation of Geiger.  The post-apocalypse apparently has crime lords, mutants, and loners.  Geiger has elements that are similar to those found in Harlan Ellison's short story, “A Boy and His Dog” and in the Mad Max films.  There are probably elements from other fictions that I don't recognize, and future issues could reveal even more.  Letterer Rob Leigh keeps the pace nice and easy so that readers can slowly figure their way around Geiger.

Geiger intrigues me, but honestly, I am not sure that I would keep reading Geiger if I had to buy it.  But since I don't have to pay for it, I'll keep reading … for the time being.