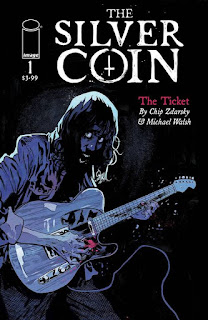 The Silver Coin in a new horror comic book anthology and miniseries published by Image Comics.  It is the creation of artist Michael Walsh and writers Ed Brisson, Jeff Lemire, Kelly Thompson, and Chip Zdarsky.  Each issue of this five-issue miniseries will tell a tale of terror that is set in a supernatural world in which the mysterious “Silver Coin” changes the lives of those who take possession of it.  The first issue is written by Zdarsky and drawn, colored, and lettered by Walsh.

The Silver Coin #1 (entitled “The Ticket”) opens in 1978.  Disco is at the height of its power over American pop culture.  Feeling that power is local rock band, the power trio, “Running Red.”  They currently have the seven o'clock spot at “The Dirty Eagle,” a rock club that now caters to the disco crowd.

Ryan, the lead singer, songwriter, and guitarist of Running Red, wants to be more than just the leader of a bar band living on the edge.  However, his band mates, bassist, Joe, and drummer, Ashley, seem happy just playing together.  One day, Ryan discovers a mysterious silver coin, and he begins using it as his guitar pick.  Before they know it, Running Red is no longer a failing rock band, but this sudden change of fortune comes with a cost – a hungry curse.

THE LOWDOWN:  I am a big fan of horror comic book anthologies, which includes, of course, the classic EC Comics titles.  However, I am also a fan of EC's comics inheritors, including Kitchen Sink Press's Death Rattle, DC Comics' Ghosts and House of Mystery, Warren Publishing's Creepy and Eerie, and Approbation Comics' Amour, to name a few.

The Silver Coin reminds me of DC and Warren's 1970s horror comics, especially because of Michael Walsh's ghostly coloring.  His ethereal compositions recall the late master of horror comics, Bernie Wrightson, and Walsh's storytelling is both efficient in its narrative and lavish in its presentation.  Even Walsh's lettering has a horrific lilt, as the fonts chronicle a creeping doom.

Chip Zdarsky, one of the most clever and inventive mainstream comic book writers, offers a standalone story that is complete and delivers the brutal comeuppance of dealing with a cursed object in a single-issue.  Efficient beginning, informative middle, and shocking ending:  we get all this in 22 pages and not in six issues of padded storytelling.

If The Silver Coin #1 is any indication of what the remaining issues will offer, I feel very confident in highly recommending it.  And I want more.

Posted by Leroy Douresseaux at 12:59 PM