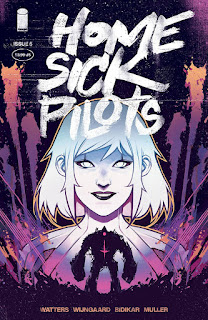 Home Sick Pilots is a comic book series created by writer Dan Watters and artist Caspar Wijngaard, the creative team of the comic book, Limbo.  Home Sick Pilots focuses on a group of teens and a haunted house with an evil mind of its own.  Letterer Aditya Bidikar and designer Tom Muller complete the series' creative team.

Home Sick Pilots opens in Santa Manos, California, July 18, 1994.  A haunted house known as “the Old James House” walks across California, and inside is Ami, the lead singer of the high school punk band, “Home Sick Pilots.”  Ami has been missing for weeks, so how did she get in the Old James House?  It has ghosts, and Ami has to find them.  But what is the entire story behind Ami, the ghosts, and that house?

As Home Sick Pilots #5 opens, the Old James House turns on Ami, and now, she has to find a way to make a deal with them – all of the ghosts that haunt the hallways.  Elsewhere, Rip discovers that Meg is not dead, and she has some kind of connection to Ami.  It all leads to a Godzilla vs. Kong-type fistfight between a house and monster!

THE LOWDOWN:  At some point in the run-up to the debut of Home Sick Pilots, the series was described as being a blend of author Shirley Jackson's novel, The Haunting of Hill House (1959); the comic book series, Paper Girls, and the Power Rangers franchise.  Home Sick Pilots #5 brings this new series' first story arc, “Teenage Haunts,” to an end.

This fifth issue definitely shows the Power Rangers side of the concept, but influences aside, Home Sick Pilots, is like no comic book I have ever read.  I doubt most American comic book fans have seen anything like it.  If Watters and Wijngaard know of a comic like their amazing creation, I wish they would share its title with us.

Seriously, the crazy thing about Home Sick Pilots is that every issue seems like something brand new, as if it is connected to a main narrative, but also has its own fresh story thing happening.  Dan Watters' script for issue #5 keeps that mysterious, weird, exciting and scary vibe, but gives us an epic, screwy “kaiju” battle and a taste of the good things to come in this series.  Caspar Wijngaard's art and colors create a crazy world of houses that transform and walk and also, everyday structures that merge to form the ultimate mecha-styled monsters.

Aditya Bidikar's lettering is rhythmic in a way that conveys the odd, but alluring nature of this series.  Designer Tom Muller gives the series a look that recalls rock music poster art and concert show flier design to Home Sick Pilots.  Watters and Wijngaard and Bidikar and Muller jam Home Sick's Pilots' first show to an end with a crescendo.  I am highly recommending readers get the upcoming trade collection, Home Sick Pilots Vol. 1: Teenage Haunts, because I'm already anticipating the sixth issue and a new story arc.

I READS YOU RECOMMENDS:  Fans of offbeat and imaginative supernatural comic books will want to fly with the Home Sick Pilots.