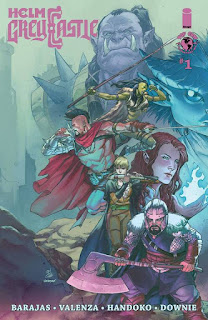 Helm Greycastle #1 (Devotion & Desire) finds Helm Greycastle and his band: Vola the fighter, Oskar Frostbeard the dwarf, and Shava Nailo the elven bard, fighting skeleton warriors to obtain a special item for their magic-using ally, Enxina Holimion.  She has a bigger task for Greycastle and company, however; she needs them to recover Uadjit, the Last Dragon Prince!

Who has him?  The abductors are from a new and previously unknown threat, Aztec Mexica.  Little does Greycastle know that there is already a resistance brewing against Aztec Mexica's leader, Montezuma III.

THE LOWDOWN:  The cover art for Helm Greycastle doesn't really convey how offbeat this new series is.  A blend of Tolkien-inspired epic and quest fantasy, role playing games, and Aztec mythology, Helm Greycastle promises to be something different.

The art team of penciller Rahmat M. Handoko and colorist Bryan Valenza is perfect in that it captures the disparate mythologies and mythopoeia of this concept.  In that way, the art and graphical storytelling suggest that it is perfectly acceptable for all of them to play on the same of field of narrative conflict.

Writer Henry Barajas may surprise some readers with how much Helm Greycastle seems like a Conan the Barbarian comic book.  Over the past five decades, many of the comic books starring Robert E. Howard's character, Conan the Cimmerian, have blended versions of real-world mythologies and pantheons of gods with the assorted pantheons of Conan's mythology.  Helm Greycastle seems firmly rooted in the sword and sorcery that inspired role playing games, and that's a good thing.  The cast of characters is quite impressive; no one is like the other.  By conception and by motivation, each is an intriguing player on the stage that is Helm Greycastle.

So I think readers will find something familiar in Helm Greycastle, while being intrigued by what makes it different.  This first issue also includes a one-shot Latinx RPG (5E compatible).  How's that for different?  I'm not interested in the RPG, but Barajas and company present a first chapter that suggests Helm Greycastle will, from page to page, offer the familiar and the different, but the reading experience will be one of harmony.  I recommend the adventurous readers give Helm Greycastle a try.

[This comic book includes the game, “Sacred Armor,” by Tristan J. Tarwater, with art and editing by Jen Vaughn.]