Review: "PROMISING YOUNG WOMAN" Rocked Me Like a Hurricane 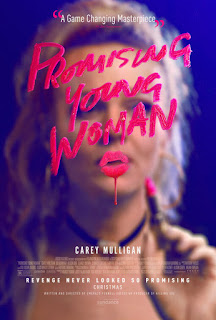 Promising Young Woman is a 2020 black comedy and suspense thriller film from director Emerald Fennell.  The film focuses on a young woman who takes revenge for a traumatic event in her past on the unwary young men who cross her path.

Now, Cassie spends her nights feigning drunkenness in clubs, and allowing men to take her to their homes.  Then, she bluntly and forcefully reveals her sobriety when these men try to take advantage of her by having sexual relations with a woman who is too inebriated to give consent.  Things begin to change when Cassie is reunited with a former classmate, Dr. Ryan Cooper (Bo Burnham), a pediatrician.  When another classmate reveals a lurid secret, Cassie resumes her mission of revenge, but can she survive her own mission.

Of the many shocking things about Promising Young Woman, one of them is actress Carey Mulligan.  She completely buries herself in this role, and the waif-like persona she adopted in some of her early films disappears in the storm of the force of nature that is Cassie.  Mulligan's performance as Cassie recalls classic Clint Eastwood movie characters like “Dirty” Harry Callahan and “Preacher” (from 1985's Pale Rider).  I also have to give a shout out to Promising Young Woman's makeup department for its work in creating Cassie's look, which, spiritually, recalls the those vengeful dead girls in such Japanese horror films as Ringu (1998) and Ju-On: The Grudge (2002).

I can't help but be impressed by the debut directorial effort of writer-director Emerald Fennell.  Her film is straight to the point.  Fennell is not being allegorical, metaphorical, or symbolic.  Fennell delivers stunning entertainment that is both a timely message movie and a timeless cinematic film, a mainstream spin of the spirit of The Last House on the Left (1972) and I Spit on Your Grave (1978).  She may or may not be talking to you, sir, but there is no doubt about what Fennell is saying.

And yes, Promising Young Woman is entertaining.  It simply manages to also blow your mind, chill your blood … and make some men reflexively cover their jewels.

Posted by Leroy Douresseaux at 5:33 AM