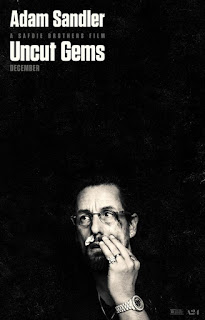 Uncut Gems is a 2019 crime drama film from directors Josh Safdie and Benny Safdie.  Director Martin Scorsese is one of the film's executive producers.  Uncut Gems focuses on a fast-talking New York City jeweler and gambling addict who risks everything in hope of staying afloat and alive.

Uncut Gems opens in 2010 in the Welo mine in Ethiopia where Ethiopian Jewish miners retrieve a rare black opal from the mine.  The story moves to 2012 where we meet Howard Ratner (Adam Sandler), who runs KMH, a jewelry store in New York City's Diamond District.  A fast-talking businessman, Howard is also a gambling addict, and he is struggling to pay off his gambling debts, which include the $100,000 he owes his brother-in-law, Arno Moradian (Eric Bogosian), a loan shark.

Howard's personal life is also in shambles, as he is estranged from his wife, Dinah Ratner (Idina Menzel).  Dinah insists on sticking to their plan of getting a divorce after Passover.  Meanwhile, Howard's relationship with his girlfriend, Julia De Fiore (Julia Fox), a KMH employee, is also up-and-down.  Still, Howard believes that all will be well when he gets that rare black opal that the Ethiopian miners found.

Things start to fall apart when Demany (Lakeith Stanfield), an intermediary who recruits clients for Howard, introduces him to NBA player, Kevin Garnett (Kevin Garnett), of the Boston Celtics.  Suddenly, holding onto and selling the opal takes on a life-or-death significance.

Audiences may pull for Adam Sandler's Howard Ratner and even root for him simply because he is the lead character in Uncut Jewels, but the truth is that Ratner is worthy of pity more than he is of sympathy.  He has a terrible case of “problem with immediate gratification.”  He is a gambling addict, and one gets the idea that he is addicted to seeking his own satisfaction.  He is vain, venal, narcissistic, and self-absorbed, and he tells lies the way people breathe air.  However, this all leads to a last act of the film when the pity that one might feel towards the pathetic Howard turns to sympathy.

Sandler gives one of the best performances of his career, and although many commentators thought that he deserved an Oscar nomination for his performance in Uncut Gems (which he did not get), he had a better character arc in 2005's The Longest Yard.  Still, Sandler proves in Uncut Gems that he can deliver a surprising performance that can even shock audiences.

However, I find the most fascinating character in this film to be Uncut Gem's version of the real-life former professional basketball player, Kevin Garnett.  Garnett fashions a version of himself that is more complex, darker, and more nuanced than the player people know from his long career in the National Basketball Association (NBA), which lasted 21 seasons from 1995 to 2016.  I could watch an entire film featuring this Garnett.

Overall, the Safdie Brothers deliver in Uncut Gems a crime drama like no other, and with screenwriter Ronald Bronstein, they offer a cast of interesting, even off-the-beaten path characters.  Actress Idina Menzel is known for her big smile and her ability to belt out a song, but here, she takes the script's Dinah Ratner and makes her a salty woman who is utterly disinterested in her wayward husband, Howard's conceited charisma.  Menzel's Dinah would set it off before she'd let it go.

The usual impeccable Lakeith Stanfield is impeccable – as usual, and I wish there was more of his Demany.  Abel Tesfaye, better known as the Grammy Award-winning singer-songwriter, The Weeknd, goes meta to turn in a delightfully edgy and smutty version of himself.

I don't know if I would recommend this film to fans of Adam Sandler's comedies, especially the raunchy and juvenile ones.  Still, the Safdies and Sandler create something so different that I think movie audiences that like to take a dare sometimes will find a dark jewel of a movie in Uncut Gems.

Posted by Leroy Douresseaux at 6:06 PM