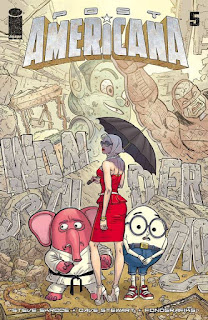 Post Americana is a six-issue miniseries written and drawn by Steve Skroce and published by Image Comics.  Post Americana is set in a dystopian future and focuses on two rebels' attempts to save an area called the “Wasteland” from a rogue President of the United States.  Colorist Dave Stewart and letterer Fonografiks complete Post Americana's creative team.

As Post Americana #5 opens, Carolyn, Mike, and Evey's ride with Night Terror has taken them to the lost coast of California to Wonder Studios, the former home of the Walt Disney-like Cromwell Leviticus Okamoto.  There, Mike finally meets his secret ally, Okamoto's wife, Marcy, in person.  Marcy soon admits to deceiving Mike, but he doesn't even know half the story.  And that could mean a death sentence for everyone on the planet – even those soft-living folks in the Bubble.

THE LOWDOWN:  I am a huge fan of writer-artist Steve Skroce, going back over two decades – which I admitted in my review of Post Americana #1.  In my review of subsequent issues of this series, I have regaled you, dear readers, with the joys of reading Post Americana.

Post Americana #5 is the penultimate issue of the series, and in it, Skroce has created an issue that seems divorced from the rest of the narrative.  However, it actually isn't, as this fifth issue serves as a launching pad for the craziness to come in the finale.  Post Americana is a blast to read, and its satire of the United States is both sharp and sly and blunt and brutal.  It is as if Skroce wields both a satirical scalpel and hammer.

As he has throughout this miniseries, Skroce gets excellent assistance in creating this fine edition of his latest comic book.  That includes superb coloring from Dave Stewart and lettering from Fonografiks that makes the craziness readable.  I can't wait for the sixth issue.

[This comic book includes a four-page preview of “The Good Asian #1” by Pornsak Pichetshote and Alexandre Tefenkgi.]

Posted by Leroy Douresseaux at 9:48 PM