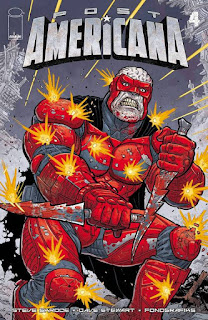 Post Americana is a six-issue miniseries written and drawn by Steve Skroce and published by Image Comics.  Post Americana is set in a dystopian future and focuses on two rebels' attempts to save an area called the “Wasteland” from a rogue President of the United States.  Colorist Dave Stewart and letterer Fonografiks complete Post Americana's creative team.

As Post Americana #4 opens, Carolyn has a surprise reunion with her mother, Eve, whom she thought was dead.  A prisoner of the forces of The Bubble, Eve is still a fighter, but our heroes are up against the psychotic Hawksworthe and now, his hoary, old hag of a mother.  When things get tough for Mike, Carolyn, Eve, and company, they will find themselves in need of some help.  Enter a hero from the bygone days, Night Terror.  So how is he alive, and do they really want his crazy-ass help?

As ever, Skroce offers something new in each issue of his creator-owned comic books, and Post Americana #4 is no exception.  Yes, the return of Eve will make readers suspicious, and it should, as it is clear that one should always expect both the next surprise and the curve balls from Skroce.  However, the story of the relationship between Carolyn and her mother tugs at the heart.  And the Night Terror angle is the funky cherry on top – to say nothing of his partner, Donny.

As usual, Skroce gets excellent assistance in creating this fine edition of his latest comic book.  That includes superb coloring from Dave Stewart and lettering from Fonografiks that makes the craziness readable.  I can't wait for the fifth issue.