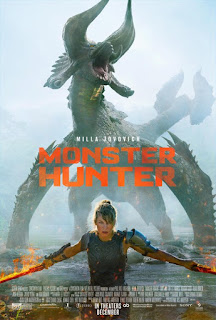 Monster Hunter is a 2020 fantasy action film from director Paul W. S. Anderson.  The film is based on Monster Hunter, the Capcom video game for the PlayStation 2.  Monster Hunter the film follows an Army Ranger transported to another world where she must fight monsters in order to survive.

Monster Hunter opens in “our world,” the world of humans, and introduces Captain Artemis (Milla Jovovich), who leads a U.S. Army Rangers unit that is working for the United Nations Joint Security Operations.  Artemis and her team:  Lincoln (Tip “T.I.” Harris), Marshall (Diego Boneta), Dash (Meagan Good), Steeler (Josh Helman), and Axe (Jin Au-Yeung) are searching for another U.N. security team that is missing.  A strange and sudden storm pulls the team into a portal that drops them into a desert-like region of the “New World.”  In this New World, humans share the world with a variety of large and savage monsters and strange beasts.

Once in the New World, Artemis and her team are attacked by “Diablos,” a horned subterranean monster that can not only walk on sand, but can also swim through the sand like it was water.  Soon, Artemis finds herself alone with a New World human, whom she names “Hunter” (Tony Jaa).  Artemis and Hunter grudgingly agree to cooperate in order to defeat the seemingly unbeatable Diablos.  But if they escape this monster, what else awaits them and how can Artemis get back to our world?

I had never heard of the Monster Hunter video game until I read a volume of the Monster Hunter manga adaptation that is published in English in North America by VIZ Media.  The main reason that I watched this Monster Hunter film is because of the husband-wife team of filmmaker Paul W.S. Anderson and actress Milla Jovovich.  Jovovich was the star of the Resident Evil film series, and Anderson wrote and produced all six films in the series and directed four of them.  I am a fan of the Resident Evil series (which is also based on a videogame) overall, and I hoped that Anderson and Jovovich could create another fantasy-action movie series that I could enjoy.  I hoped...

I have mixed feelings about this Monster Hunter movie.  The visual effects, especially the CGI used to create the monsters and creatures of the New World are fantastic.  Diablos is a monster both fearsome and beautiful, and it could be the star of its own movie.  The spider-like Nerscyllas had my heart racing; they are creepy and bloodcurdling.  The dragon-like Rathalos is another great beast in the film and reminds me of the film version of the dragon, Smaug, that appeared in Peter Jackson's The Hobbit films.  Rathalos is also a CGI creation of exceptional beauty and awesomeness.

The action sequences are good, but they all seem to run a little long.  Killing the Monster Hunter monsters is like killing horror film villains, Michael Myers and Jason Voorhees.  Every time, you knock them down, they pop up less than half a minute later.  I get that the monsters of Monster Hunter are supposed to be hard to destroy, but sometimes it seems as if the filmmakers are stretching it all past the point of credulity.

What really hurts Monster Hunter is the awful acting and crappy characters.  I can deal with bad acting in this kind of movie, but not characters this bad.  All the characters, even Artemis, are little more than props to be tossed around and chewed up by monsters.  I think that the reason I like Monster Hunter's monsters so much is because I prefer time with them rather than screen time with these wooden, personality-absent characters.  Making Milla Jovovich's Artemis and Tony Jaa's Hunter the center of this film was a mistake.  They don't have screen chemistry, and every moment that they are together screams that they are a mismatched pair.

The rating and grade that I am giving Monster Hunter is for the visual effects and production design.  It's too bad.  I wanted this to be the start of a film series, and should there be a sequel, the film studios and production companies involved will have to do a major overhaul of the characters and cast.

Posted by Leroy Douresseaux at 5:05 PM