Review: "Mr. Holmes" Shows that Ian McKellan is as Sharp as Ever 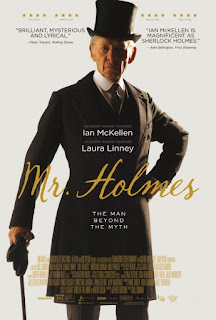 [A version of this review originally appeared in Patreon.]

DRAMA with elements of a mystery

Mr. Holmes is a 2015 British-American drama from director Bill Condon and writer Jeffrey Hatcher.  The film is based on the 2005 novel, A Slight Trick of the Mind, from author Mitch Cullin.  Mr. Holmes the movie focuses on an aged and retired Sherlock Holmes, who struggles with early dementia as he tries to remember his final case, which haunts him.

Mr. Holmes opens in 1947.  The long-retired Sherlock Holmes (Ian McKellen) returns from abroad and travels to Headley House, his farmhouse in Sussex.  He shares his home with Mrs. Munro (Laura Linney), his housekeeper and a war widow, and Roger (Milo Parker), her young son.  Holmes is suffering from early dementia or “senility.”  His trip abroad was to Japan, specifically Hiroshima, where he hoped to find the prickly ash plant, as he believes a “jelly” made from the plant can act as an elixir and help his failing memory.

Holmes is trying to recall his last case, which occurred over 30 years prior.  A suspicious husband, Thomas Kelmot (Patrick Kennedy), had asked Holmes to investigate his wife, Ann (Hattie Morahan).  Something happened, leaving the case unfinished and causing Holmes to retire.  Unhappy with his ex-partner, Dr. John Watson's account of the case, Holmes hopes to write his own account.  However, he has trouble recalling the details, but young Roger's curiosity drives the legendary detective to close a troubled chapter in his famed career.

Sherlock Holmes first appeared in the 1887 detective novel, A Study in Scarlet, which was written by British author, Arthur Conan Doyle.  Just over a decade later, the Holmes character began appearing in films, and after a little more than a century, Holmes has appeared in over 200 films (according to the British newspaper, The Telegraph).

Although I am a fan of Sherlock Holmes, I would be surprised if I have seen even 30 of those films.  I am certainly happy to have experienced Mr. Holmes.  It is one of the best Sherlock Holmes films that I have ever seen, primarily because of Ian McKellen's tenderly-wrought and alluring turn as Holmes.

As the 93-year-old Holmes, McKellen fashions a vulnerable man, who doggedly fights a losing battle with his health.  Still, he maintains his dignity and learns to change and to acknowledge his errors and misjudgments, both in the past and in the present.  As the Holmes seen in this film's flashbacks, who is in his late 50s or early 60s (which is somewhat unclear), McKellen presents a Holmes who is clearly a man of some age, but who is also clearly still a detective in full.  It is a testament to McKellen's skills and talent as a thespian that he can make two versions of “old-man Holmes” that are distinct from one another and are of different states of mind and intellect.

Laura Linney is potent and fiery as Mrs. Munro, although the script mostly keeps her restrained, even silently suffering.  Once again, a consummate actor takes what is given to her and makes it more than an actor of lesser skills could.  Young Milo Parker steals the movie as the brash Roger, who is on the cusp of young manhood and whose curiosity is a torch that brings light to what could have been a dark and moody film.

I recommend Mr. Holmes without reservations to fans of Sherlock Holmes movies and to fans of director Bill Condon.  He seems always to deliver interesting films that grab the audience with their unique way of being film narratives.  I think that there must simply be at least a few film award nominations in its future because Mr. Holmes does Sherlock Holmes so differently and so delightfully.

Posted by Leroy Douresseaux at 4:46 PM