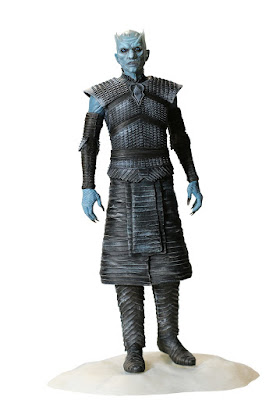 NEW YORK, NY—Dark Horse Deluxe, an imprint of Dark Horse Comics, has revealed the latest figure in an ongoing series of characters from the critically acclaimed HBO® series Game of Thrones®: the Night King.

The masterfully sculpted figure finely details the leader of the White Walkers. It measures eight inches in height and is packaged in a collectors’ window box.

The Night King will be the twenty-fourth figure in the series and is slated for in-store release in September of 2016.

“The Night King’s confrontation with Jon Snow in the aftermath of the Hardhome battle is one of the most dramatic moments of Game of Thrones to date. We are very excited to have captured the power of this character in a stunning new figure,” Dark Horse Product Development head David Scroggy remarked.

Response to the Game of Thrones collectible figure line has been overwhelming, and additional characters are in development for release in summer and fall 2016. The Night King figure will be joined by Ygritte, Margaery Tyrell, Oberyn Martell, Grey Worm, and Varys.

Dark Horse also recently announced a limited-edition bust statue of the Night King, which will be released in March 2016.

Game of Thrones figures have a suggested retail price of $24.99 and are packaged in deluxe window box packaging.


About HBO Global Licensing
HBO Global Licensing officially licenses the HBO® brand for the development and merchandising of innovative product lines inspired by the network's award-winning programming. With products created around hit series like Game of Thrones® and True Blood® as well as classic series like The Sopranos®, Sex and the City®, and Entourage, items include fashion apparel, figures, jewelry, digital and CD soundtracks, prop and costume replicas, games, books, and beverages, as well as exclusive, premium collections in partnership with upscale, designer brands. Merchandise can be purchased in retail stores nationwide, at http://store.hbo.com, and at the groundbreaking HBO retail hub, the HBO Shop®, located at 42nd and 6th Avenue in New York City. HBO Global Licensing products are also sold internationally across Europe (www.hboshopeu.com), Asia and Australia.

About Dark Horse
Founded in 1986 by Mike Richardson, Dark Horse Comics has proven to be a solid example of how integrity and innovation can help broaden a unique storytelling medium and establish a small, homegrown company as an industry giant. The company is known for the progressive and creator-friendly atmosphere it provides for writers and artists. In addition to publishing comics from top talent, such as Eric Powell, Mike Mignola, Geof Darrow, Brian Wood, Gail Simone, Stan Sakai, and Guillermo del Toro, and comics legends, such as Will Eisner, Milo Manara, Kazuo Koike, Neil Gaiman and Frank Miller, Dark Horse has developed its own successful properties, such as The Mask, Ghost, X and Barb Wire. Its successful line of comics, manga and products based on popular properties includes Dragon Age, Buffy the Vampire Slayer, Aliens, Conan, Tomb Raider, Halo, The Witcher, Serenity, Game of Thrones, and Avatar: The Last Airbender. Today Dark Horse Comics is the largest independent comic book publisher in the US and is recognized as one of the world’s leading entertainment publishers.