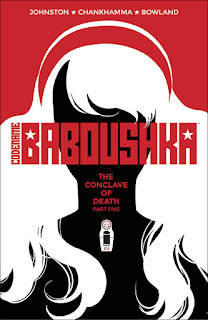 THE FIRST CHAPTER OF CODENAME BABOUSHKA ENDS WITH A BANG

Previously in CODENAME BABOUSHKA: THE CONCLAVE OF DEATH, the enigmatic Contessa, the last heiress to a noble Russian line (and secret deadly assassin!), was blackmailed by the U.S. government to carry out dirty jobs even the C.I.A. can't sanction—like “persuading” a retiring crime lord to sell her his secrets.

In CODENAME BABOUSHKA: THE CONCLAVE OF DEATH #5, the gauntlet is thrown down! Everything explodes…or at least, it will if Baboushka can’t stop it. Don’t get in her way!

"The Conclave of Death ends with a bang—and, unsurprisingly, several deaths!” said Johnston. “But long after the smoke clears, Baboushka will be forever changed. The future is full of guns, high-kicks, and yet more secrets to be revealed..."