VIZ Media Announces "Pokemon The Movie: Hoopa and the Clash and Ages" Two-Fer 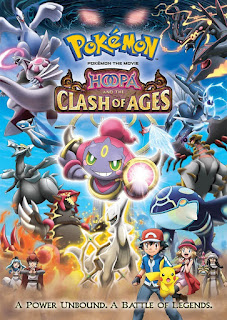 VIZ MEDIA ANNOUNCES UPCOMING HOME MEDIA AND MANGA RELEASES FOR POKÉMON THE MOVIE: HOOPA AND THE CLASH OF AGES

San Francisco, CA – VIZ Media, LLC (VIZ Media), the largest publisher, distributor and licensor of manga and anime in North America, announces the home media release and debut of the official manga adaptation of POKÉMON THE MOVIE: HOOPA AND THE CLASH OF AGES in early March.

Both of the editions offer fans all of the fun and adventure of the newest POKÉMON anime feature film. POKÉMON THE MOVIE: HOOPA AND THE CLASH OF AGES was directed by Kunihiko Yuyama and was originally released in Japanese theatres last summer.

Capture all of the action of the newest POKÉMON feature film in this single-volume official manga adaptation. Features story and artwork by Gin Kamimura.

In a desert city by the sea, Ash, Pikachu, and their friends meet the Mythical Pokémon Hoopa, who can summon all sorts of things—including people and Pokémon—through its magic rings. The little Mischief Pokémon likes to use this talent to play harmless tricks on people...but when its true power is released, it loses control and becomes the towering and terrifying Hoopa Unbound! Long ago, a brave hero stopped its rampage by confining its power in a special bottle. Now that the bottle has been rediscovered, Hoopa must confront its greatest fear! Can Ash help his new friend overcome the darkness within—or will this dangerous struggle erupt into a clash of legends? Catch all the action presented with dubbed English or subtitled dialogue options as well as 2.0 and 5.1 audio selections.

“Ash, Pikachu and the rest of the POKÉMON gang return for their latest feature film adventure in Pokémon the Movie: HOOPA AND THE CLASH OF AGES and the action doesn’t stop as they help their new friend prevent a dangerous menace from causing massive destruction,” says Charlene Ingram, Senior Marketing Manager, Animation. “Don’t miss all the fun of the home media release and the official manga adaptation coming next month!”

For more information on other Pokémon manga and anime titles from VIZ Media, please visit www.VIZ.com.

Posted by Leroy Douresseaux at 5:44 AM