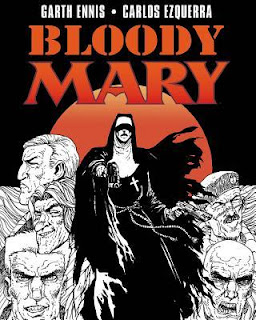 “It's fantastic to see Bloody Mary back in print in this new edition from Image, said Ennis. “About time, really, Mary's been missing in action for far too long.”

Ezquerra added: "Mary Malone is one of my best loved comic characters."

BLOODY MARY is set in a world only slightly worse than our own, a third great European conflict has dragged the major powers into a lethal war of attrition. Now, Mary Malone, the most dangerous assassin in a land of killers, must face both a man who cannot die and a crazed cult leader whose flock are all too ready to die for him.

Posted by Leroy Douresseaux at 5:29 AM