VIZ Media Announces the Release of "Legend of the Galactic Heroes, Vol. 1" 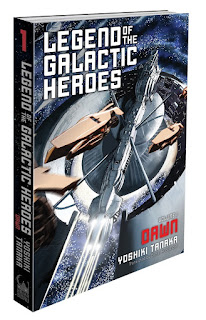 LEGEND OF THE GALACTIC HEROES, VOLUME 1: DAWN is the first in the author’s celebrated series set to be released by Haikasoru, with Volumes 2 and 3 debuting this summer and fall, respectively. LEGEND OF THE GALACTIC HEROES, VOLUME 1: DAWN will debut in print with an MSRP of $15.99 U.S. / $18.99 CAN. An eBook edition will debut on March 8th for the Amazon Kindle, Apple’s iBooks Store, Barnes & Noble’s Nook Book Store, the Kobo eBooks Store, and the Google Play store. An audiobook version, read by Tim Gerard Reynolds, will debut the same day through Simon & Schuster Audio with an MSRP of $23.99 U.S.

In the thirty-sixth century humanity has conquered the galaxy and colonized countless star systems. The Galactic Empire, modeled along Prussian lines, and the democratic Free Planets Alliance are at war, and the fate of every human being in the universe hangs in the balance. This classic Japanese space opera, adapted into a legendary anime, is finally available in English for the first time.

In the opening novel of the series, “The Golden Brat,” Reinhard von Lohengramm, is a military prodigy and admiral of the Galactic Empire and has ambitions beyond protecting the borders or even defeating the Empire’s enemies. He seeks to overthrow the old order and become a truly absolute – yet benevolent – dictator. His rival, the humble Yang Wen-li of the Free Planets Alliance, wishes to preserve democracy even if he must sacrifice his political ideals to defeat the Empire. Their political and military battles play out over a galactic chessboard in an epic saga fifteen centuries in the making!

“The LEGEND OF THE GALACTIC HEROES series of novels were extremely popular in Japan also spawned popular anime and manga adaptations that have gained fans all over,” says Nick Mamatas, Editor. “We have received many requests from readers over the years asking us to publish LEGEND OF THE GALACTIC HEROES and this English publication is sure to capture a whole new legion of fans for the work of this celebrated author.”

Author Yoshiki Tanaka was born in 1952 and won the Gen’eijo (a Japanese mystery magazine) New Writer Award in 1978 for his debut story, “Midori no Sogen ni…” (On the Green Field…), which launched his career as a science fiction and fantasy writer. LEGEND OF THE GALACTIC HEROES: DAWN translates the European wars of the 19th Century to an interstellar setting and won the prestigious Seiun Award for Best Science Fiction Novel in 1987. Tanaka’s other works include the fantasy series, The Heroic Legend of Arslan, and numerous other science fiction, fantasy, historical, and mystery novels and stories.

For more information on LEGEND OF THE GALACTIC HEROES, other releases from the Haikasoru imprint, please visit www.haikasoru.com.

For more information on other titles available from VIZ Media, please visit www.VIZ.com.

Posted by Leroy Douresseaux at 5:45 AM