Review: "Just One of the Guys" Not Just Another Teen Movie 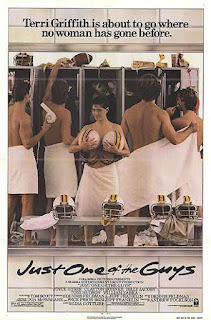 Just One of the Guys is a 1985 comedy and high school romance from director Lisa Gottlieb and writers Dennis Feldman and Jeff Franklin.  The film focuses on a popular and attractive high school student who disguises herself as a teen boy in order to win a high school journalism contest.

Just One of the Guys introduces high school student, Terry Griffith (Joyce Hyser), of Phoenix, Arizona.  She has it all:  the looks, the popularity, and a college boyfriend who is quite the hunk.  Terry is also an aspiring teenage journalist, but her male teachers at Edwina Pearl High School don't take her newspaper articles seriously, mostly because she is a girl.  In fact, her journalism teacher, Mr. Raymaker (Kenneth Tigar), has chosen articles written by two male students to be entered in a contest that will land one student a summer internship at the Sun-Tribune.

So Terry comes up with an idea that will help her write an article that will earn her respect and hopefully win that summer internship.  With the help of her horny, little brother, Buddy (Billy Jacoby), and her lovelorn best friend, Denise (Toni Hudson), Terry disguises herself as a teen boy and enrolls in rival Sturgis-Wilder High School.  As a student at this new high school, Terry is sure that she can write an article about high school boys as secretly observed by a girl undercover as a boy.  Her mission goes awry when she meets handsome nerd, Rick Morehouse (Clayton Rohner).  Rick becomes her pet project, as she tries to give him a makeover and get him a date to the prom.  But Terry starts to fall in love with Rick.

I pretty much ignored 1980s teen movies that revolve around high school romance, and I had never even heard of Just One of the Guys.  However, a few weeks ago, I found an article on the Yahoo Movies website (https://www.yahoo.com/movies/are-those-what-i-think-they-are-a-revealing-175211213.html) about the 1985 film.  It turns out that 2015 is the 30th anniversary of the film's initial release (specifically April 26, 1985).  Apparently, Just One of the Guys is fondly remembered and has fanbase and something of a cult-following.  In fact, the magazine Entertainment Weekly once included Just One of the Guys in its listing of the “50 Best High School Movies” (at #48).

After reading a few paragraphs of the Yahoo article, I decided to rent Just One of the Guys from Netflix.  I enjoyed the film so much that it once again reminded me that Netflix is essential to my life as a movie-lover.  I won't call it a great movie, but Just One of The Guys is quite good and shouldn't be lost to history.

Just One of the Guys is a loose adaptation of William Shakespeare's comedy, Twelfth Night, which also inspired the 2006 high school comedy, She's the Man.  You don't need to have seen Shakespeare's play in order to enjoy this film.  All you need is the ability to sympathize with Terry Griffith and to see things from her point of view.  As Terry, Joyce Hyser gives a natural performance that sells the absurdity of her role and this movie's conceit.  I found myself willingly suspending disbelief because Hyser made me believe in Terry, her motivations, her plan, and her character.  In the way that Dustin Hoffman made Tootsie worthy of the audience suspension of disbelief, Hyser makes us want to latch onto Terry and buy into the entire act.


Posted by Leroy Douresseaux at 6:49 PM