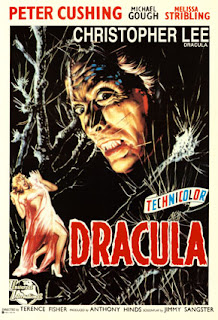 Dracula is a 1958 British horror film from director Terence Fisher.  Written by Jimmy Sangster, this was the first in a series of movies from Hammer Films that were inspired by Bram Stoker's 1897 novel, Dracula.  For its release in the United States, the film's title was change to Horror of Dracula so that it would not be confused with the 1931 film, Dracula (starring Bela Lugosi), which was apparently still quite popular in the U.S. at that time.  In Hammer's Dracula, vampire expert Van Helsing fights to stop Dracula from taking revenge against the family of a former colleague of Van Helsing's.

Horror of Dracula opens on May 3, 1885, Jonathan Harker (John Van Eyssen) arrives at a castle near Klausenburg (in Romania).  It is the home of Count Dracula (Christopher Lee), and Harker is there to take up his post as Dracula's librarian.  Almost immediately, Harker experiences a series of strange events, including meeting a young woman who claims to be Dracula's prisoner.

A few days later, Harker's colleague, Dr. Abraham Van Helsing (Peter Cushing), arrives in Klausenburg, looking for Harker.  What he finds chills his blood.  Van Helsing returns to Karlstadt to inform Harker's fiancée, Lucy Holmwood (Carol Marsh), of the bad news.  Lucy's brother, Arthur Holmwood (Michael Gough), and his wife, Mina (Melissa Stribling), are reluctant to give any bad news to Lucy, who has been ill of late.  Van Helsing alone suspects that the terrible evil of Count Dracula's castle has arrived in Karlstadt to haunt the Holmwoods.

Horror of Dracula was the first of seven movies for Hammer Films in which Christopher Lee played Count Dracula, which is why Lee is arguably the second most famous Dracula in film history, after Bela Lugosi.  Lee made Dracula both sexual and dangerous, like a creepy guy who ignores any rejection to his advances.  [He just knows that he can “love” you good, girl.]  There is a moment in this film when Dracula rubs his face against Mina's face which encapsulates Dracula's power of seduction.  He is essentially a home invader slash rapist, but his moves make him see like the masculine hero of a romantic tale that is also a rape fantasy.

While fans remember this 1958 Dracula film for Lee, I remember it equally for Peter Cushing, one of my all-time favorite actors.  Cushing is the consummate stoic and stalwart horror and scary movie hero.  Cushing's monster fighters can keep their cool even when surrounded by killer monsters and other strange creatures.  Throw in a natural disaster, and maybe a Cushing hero will break a little sweat.

Cushing and Lee, who were close friends in life, formed one of the best hero-villain combinations in film history.  I wish Horror of Dracula were a longer film in order to give us more of the two locked in conflict.  [There is apparently various longer versions of this film.]  I must also make note of another British actor that I like, the late Michael Gough, who played Bruce Wayne's butler, Alfred Pennyworth, in four Batman movies, beginning in 1989.  Gough manages to keep his Arthur Holmwood from turning invisible behind Van Helsing and Dracula.

With Christopher Lee's recent passing, I decided to see this movie again, which I had not seen in its entirety in over a decade.  I am glad I did.  It was good to see Cushing (who died in 1994) and Lee in action.  They don't make movies like Horror of Dracula anymore.  There aren't actors like Lee and Cushing anymore, either.


Posted by Leroy Douresseaux at 5:50 PM