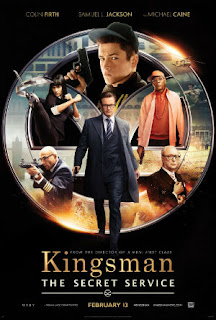 [This review first appeared on Patreon.]

Kingsman: The Secret Service opens in 1997 during a raid in the Middle East, in which an agent sacrifices himself to save his team.  Feeling guilt, agent Harry Hart (Colin Firth), code-named “Galahad,” visits the agent's wife and young son.  Seventeen years later, Galahad comes to the rescue of the son, Gary “Eggsy” Unwin (Taron Egerton), who is now an unemployed adult.

Galahad introduces Eggsy to the “Kingsman,” a secret intelligence agency comprised of the members of the British upper crust.  Galahad convinces Eggsy to join the Kingsman's ultra-competitive training program, but only one member of a recruiting class will become a member of the Kingsman.

Meanwhile, billionaire tech genius, Richmond Valentine (Samuel L. Jackson), has hatched a plan to save the world from environmental catastrophe.  His activities draw the attention of the Kingsman, especially Galahad.  Because Galahad is his benefactor, Eggsy gets a close-up look of the Kingsman in action, but does this unrefined “street kid” have what it takes to be in this “secret service?”

I must admit to enjoying Kingsman: The Secret Service quite a bit, but it is mostly a substance-free past-time.  As much as I enjoyed the film, I had mostly forgotten about it a few hours after seeing it.  If I watched it again, I would only watch certain scenes – mostly the fight scenes, especially the ones featuring the blade-legged Gazelle (Sofia Boutella).  There is not enough of her in this movie.

There are moments in Kingsman when it seems obvious to me that Colin Firth would make a good movie secret agent, not James Bond, but someone like Galahad.  [Or maybe that can be said about most quality British male actors.]  However, Samuel L. Jackson, as Valentine, seems to be the actor who most bought into the scenario.  He and Boutella make a great team and do a lot to make Kingsman a good movie; I wish their characters could return.

On the other hand, Taron Egerton may be an up-and-coming, young British actor, but as Eggsy, he lacks spark and charisma.  He is as flat as Sam Jackson is charismatic.  Kingsman's concept and story is ridiculous and contrived, but fun.  As the villain, Jackson is the one who most sells the movie, even more so than the actors playing the good guys.

A sequel to Kingsman: The Secret Service has already been announced.  As much as I enjoyed this movie, I can't imagine the sequel working without another great villainous pair like Jackson and Boutella.  I hope they find one.


Posted by Leroy Douresseaux at 4:54 AM