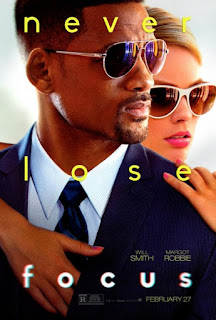 [The review first appeared on Patreon.]

Focus is a 2015 crime film and romantic comedy-drama from writer-directors, Glenn Ficarra and John Requa.  The film stars Will Smith as a con man and Margot Robbie as the woman from his past who shows up in the middle of his latest con.

Focus opens in New Orleans where veteran con man, Nicky (Will Smith), meets a beautiful young woman named Jess (Margot Robbie).  Jess seduces Nicky, but he quickly sees through her ruse, and she reveals herself to be an inexperienced grifter.  Nicky allows Jess to apprentice with his crew as they plan to con and to steal their way though New Orleans during the weekend of a big football championship game.  However, Nicky eventually sends Jess away, letting her believe that he was just using her.

Three years later, Nicky is in Buenos Aires, where he is working on a con with billionaire motor sport team owner Rafael Garriga (Rodrigo Santoro).  Nicky gets thrown for a loop when he discovers that Jess is on the other side of this con job.

I am a big fan of Will Smith, so I have seen almost all of his films.  One thing that I have noticed is that in some of Will's films, especially in action movies, the filmmakers or the studio expect Will to be funny, although he is a fine dramatic actor.  So, we end up with films like Wild Wild West, which reportedly went through extensive re-shoots in order to add some comedy to the weird Western/action movie mash-up.  The final product was problematic, to say the least.

In fact, Will's 2008 hit film, Hancock, also seemed to suffer from a lack of... focus.  It wanted to be a action comedy about a disaster-prone, washed-out superhero in need of a PR guru.  Then, the film wanted to be a romantic drama about a love triangle, wherein a bad-boy superhero woos his new best friend's wife.  Then, Hancock turned into some kind of dark fantasy drama about fallen gods.

Focus starts off in New Orleans as a heist movie that lets the viewer inside the world of highly-skilled pickpockets, purse-snatchers, and con men; there is a romantic drama backdrop.  In Buenos Aires, the movie starts off as a romantic drama about reunited lovers, but that soon becomes romantic comedy with drippings of a crime thriller.

Well, the best part of this movie is the chemistry between Will Smith and Margot Robbie.  They make the romantic drama seem genuine, and when the film switches tone, they are witty and engaging star-crossed lovers with a perfect comic touch.  I loves me some Charlize Theron (who played opposite Will in Hancock), but I think that Margot Robbie is Will's best co-star to date.  Will and Margot need a better movie.

Although I am critical of Focus' shift in tone and genre-hopping, I like the many twists and turns of its plot, and its glamours backdrops and sets make Focus a gorgeous-looking movie.  Focus also has a scene-stealing star in supporting actor, Adrian Martinez as Farhad, and it is always good to see Gerald McRaney, who plays a hard-ass named Owens.  [I might be partial to McRaney because, before he died, my father was a fan of “Simon & Simon,” the 1980's CBS television series in which McRaney was one of the leads.]

My complaints aside, I really liked Focus, but I don't know if my review will be of much use to readers wondering about this film.  As I said, I am a big Will Smith fan, so that colors my reviews of his films.  And I did really like After Earth...


Posted by Leroy Douresseaux at 4:36 PM