Review: "Batman vs. Robin" Finds a Star in Nightwing 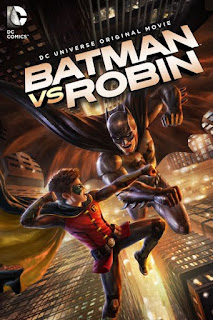 Batman vs. Robin is a 2015 straight-to-video animated superhero film from Warner Bros. Animation.  It is the 22nd film in Warner's line of DC Universe original animated movies.  The film focuses DC Comics' dynamic duo, Batman and his ten-year-old son who is the current Robin.

Batman vs. Robin opens with Damian Wayne (Stuart Allan), the current Robin, racing to confront the monstrous child abductor, The Dollmaker (“Weird Al” Yankovic).  Damian's rash actions lead to a confrontation with his biological father, Bruce Wayne a.k.a. Batman (Jason O'Mara).  During the battle with The Dollmaker, Damian meets a mysterious costumed-figure named Talon (Jeremy Sisto), whose violent methods are similar to his own.

Back at Wayne Manor, there is tension, as Damian struggles to follow Bruce's strict rules, especially his no-killing rule when they are Batman and Robin.  Damian decides to meet Talon and learns of a secret society known as the Court of Owls.  Damian does not know that this group has an old and troubling connection to Bruce Wayne.

Batman vs. Robin is mildly entertaining.  I found the Wayne Manor battle royale that dominates this animated film's last act to be invigorating.  The rest of the film interested me only a little.  I found myself drawn to Nightwing/Dick Grayson (Sean Maher), a supporting character to the Batman and Robin family-strife act, and I have to admit that I would have found it difficult to watch this movie without Nightwing appearing in it.

Batman and the Damian Wayne Robin make an interesting dynamic, but it is better with Nightwing.  I think that I will remember Batman vs. Robin for Nightwing.


Posted by Leroy Douresseaux at 6:17 PM