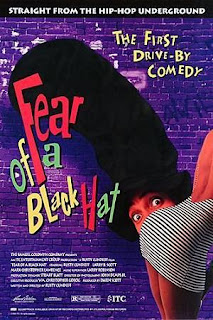 Fear of a Black Hat is a 1994 comedy and music film from writer-director, Rusty Cundieff.  The film is a mock documentary or “mockumentary.”  Fear of a Black Hat chronicles the rise and fall of a controversial hip-hop group, NWH, simultaneously examining the evolution of and the state of hip-hop music in America.

The early 90’s saw two This is Spinal Tap-like parodies of hip hop culture.  The first to make it to the screen was the Chris Rock starrer, CB4, but the funnier of the two was Rusty Cundieff’s Fear of a Black Hat.  Anyone familiar with the culture of rap, especially the rap music and artists of the late 80’s and early 90’s, will find this satire and parody extremely entertaining.

Fear of a Black Hat begins when Nina Blackburn (Kasi Lemmons), a college graduate student, decides to do her thesis on a rap group.  She chooses Niggas with Hats, or N.W.H. as the subject of a documentary film.  Her film follows the vulgar trio:  Ice Cold (Rusty Cundieff), Tasty Taste (Larry B. Scott), and Tone Def (Mark Christopher Lawrence) from their underground success to their ride as one of the top hip hop acts to their obligatory break up and subsequent reunion.

The acting is mostly very good, and the parody is dead on.  Like some rap music and hip hop culture, Fear of a Black Hat is vulgar, rude, insipid, ridiculous, and very fun.  Cundieff is sly.  On one had this is not taken too seriously; on the other, he’s making a lot of pointed commentary about racism, bigotry, and opportunism, and he’s especially skewering how entertainers use violence and hate in crass attempts to gain attention, money, and fame.  Cundieff seemed to understand that rap was often just Black America doing a self-parody of urban African-American culture – the civil rights activism, self-hate, misogyny, bigotry, and violence to make a point and cash.  Not only do the costumes, settings, and characters reflect that, but also the songs by Cundieff and his songwriting collaborator, Larry Johnson, that really hit upon the culture.

Even people who don’t like hip hop or don’t know it could find Fear of a Black Hat uproarious; some of the stuff in here is just absolutely outrageous and can’t help but elicit laughs.  Those who remember the time period that Fear of a Black Hat reflects will laugh as well as feel a little sentimental, maybe even missing acts like N.W.A., Public Enemy, and Ice T, who represented for an invisible American subculture and showed it off to the world.


Posted by Leroy Douresseaux at 5:14 PM