VIZ Media Has New Content for Neon Alley, Including "Coppelion" 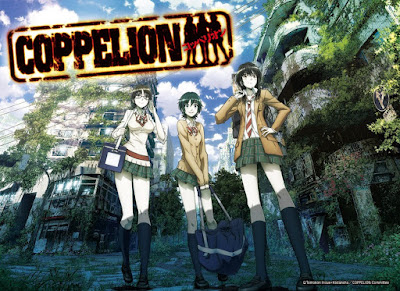 Out of this world Sailor Guardian anime action continues all month long with a two subtitled SAILOR MOON episodes premiering each Monday, beginning with SAILOR MOON Episodes 128 & 129 as well as Episodes 130 & 131, which are available now. The newest episodes also mark the beginning of the epic fourth season of the legendary series.

NARUTO SHIPPUDEN simulcasts also take place throughout August with subtitled streams of the latest action packed episodes straight from Japan every Thursday. Don’t miss the newly simulcast Episodes 422 & 423 on Hulu freshly added this week. NARUTO SHIPPUDEN action also continues on weekends with new dubbed installments available to stream each Saturday: Episodes 297 & 305, which are available now. Want to start from the beginning? Additional dubbed NARUTO action continues with the premiere of Episodes 168 to 179, which are available to stream now in their entirety.

COPPELION
·         Dive into the post-apocalyptic action and drama of COPPELION with the complete series (Episodes 1-13) now available to stream in its entirety with both subtitled and English dubbed options.

·         COPPELION takes place in the not-so-distant future as a catastrophic event has turned the old capital of Japan into a wasteland, forever changing the lives of its people. Decades later, three schoolgirls set foot into the now forsaken city. They are the Coppelion, genetically engineered humans created by the Japan Ground Self-Defense Forces to operate under the lethal conditions of the contaminated city. Trained since birth, the girls must use all of their skills and resources to carry out their one and only mission: to rescue those left behind.

KEKKAISHI
·         Join the supernatural action of KEKKAISHI with the streaming premiere of dub Episodes 14 to 26. (Episodes 1-26 are now available subtitled and English dubbed)

·         KEKKAISHI is based on a hit manga series created by Yellow Tanabe (also published in North America by VIZ Media). Mystical forces are powerful in the region called Karasumori. For over 400 years, it has been the duty of a clan of “kekkaishi” – barrier masters – to guard the land and exterminate the supernatural creatures that are drawn to the area night after night.

RANMA ½
·         Neon Alley viewers can watch dubbed Episodes 1 to 69 with the addition of Episodes 47 to 69 this month available to stream! This addition joins Episodes 1 to 161 subtitled with Japanese dialogue streaming now.

·         In RANMA ½, Ranma Saotome never thought a martial arts training mission to China would turn out like this! An accidental dunk in a cursed spring changes boy Ranma into a young girl, every time he is splashed with cold water. Hot water reverses the effect - but only until next time!

Additional information on Neon Alley is available at: www.NeonAlley.com and http://blog.neonalley.com.