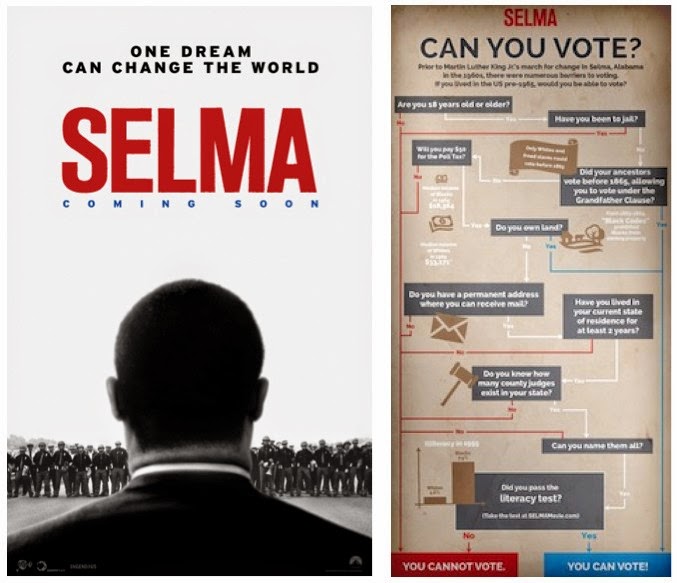 Watch the first trailer for SELMA

Can you pass a voting literacy test? - www.SelmaMovie.com/SelmaLiteracyTest

Voting is a topic at the forefront of culture. Whether debating the effects of voter ID laws or discussing the importance of voting to push for more police regulation, we find ourselves at a pivotal time in history. As we approach the theatrical release of SELMA and the 50th anniversary of the passing of the Voting Rights Act of 1965, we take a reflective look at where America would be without this powerful movement via an infographic that simply asks the question, “Can you vote?”

SELMA is the story of a movement. The film chronicles the tumultuous three-month period in 1965, when Dr. Martin Luther King, Jr. led a dangerous campaign to secure equal voting rights in the face of violent opposition.  The epic march from Selma to Montgomery culminated in President Johnson (Tom Wilkinson) signing the Voting Rights Act of 1965, one of the most significant victories for the civil rights movement.  Director Ava DuVernay’s SELMA tells the story of how the revered leader and visionary Dr. Martin Luther King Jr. (David Oyelowo) and his brothers and sisters in the movement prompted change that forever altered history.