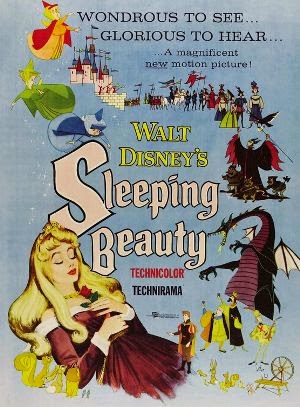 ANIMATION/FANTASY/FAMILY with elements of comedy

Sleeping Beauty is a 1959 animated musical fantasy film from Walt Disney Productions.  It is the 16th film in the Walt Disney Animated Classics series, but it was the last animated Disney film based on a fairy tale until The Little Mermaid in 1989.

Sleeping Beauty is based on two similar fairy tales:  “La Belle au bois dormant” by Charles Perrault and “Little Briar Rose” by The Brothers Grimm.  The film also features adaptations and arrangements of musical numbers from Pyotr Ilyich Tchaikovsky's 1890 ballet, The Sleeping Beauty.  In Disney's Sleeping Beauty, three good fairies protect a princess from a malevolent fairy who placed a curse on her when she was an infant.

Sleeping Beauty opens in the 14th century in an unnamed kingdom, where King Stephan (Taylor Holmes) and the Queen (Verna Felton) have been childless for years.  Then, they welcome the birth of a daughter, Aurora, and they proclaim a holiday so that their subjects can celebrate her birth.  At that celebration, the infant Aurora is betrothed to young Prince Phillip, the son King Hubert (Bill Thompson).  Three fairies:  Flora (Verna Felton), Fauna (Barbara Luddy), and Merryweather (Barbara Jo Allen) arrive to bless the child with gifts.

However, an welcomed visitor, the evil fairy queen, Maleficent (Eleanor Audley), arrives, furious that she has been snubbed by King Stephan and Queen Leah (who is only called “the Queen” in the film).  So she places a curse on baby Aurora that will killer her on her 16th birthday.  However, the fairies are able to temper the curse, and later, they spirit the child away in order to protect her.  Sixteen years later, Aurora, now named “Briar Rose” (Mary Costa), meets a handsome young man (Bill Shirley) and falls in love with him, while unaware of the death curse hanging over her sixteenth birthday.

Sleeping Beauty is not one of Walt Disney's better animated feature films, but it features one of Disney's most memorable villains, Maleficent, a classic animated character because of her unique look.  In fact, the overall look of Sleeping Beauty is something that makes it stand out, in large measure because of the work of Disney production designer regular, Ken Anderson, and Disney artist, Eyvind Earle, who was Sleeping Beauty's color stylist and chief background designer.  Chuck Jones, the legendary Looney Tunes and Warner Bros. Pictures animation director, was a layout artist for Sleeping Beauty, but did not receive a credit in the film.  The musical score and the songs in the film are also a hallmark of this film and are also Disney musical favorites.

Another thing about Sleeping Beauty is that it is also a bit irregular as fantasy films go.  People may remember it as a fairy tale romance with its happily-ever-after ending about a Disney princess finding her prince.  However, Sleeping Beauty is also a comic fantasy with a generous amount of humor, some of it involving even Maleficent.  Sleeping Beauty is an oddity in the Disney animated feature film pantheon, but there are reasons to remember it.  Like most Disney films, those reasons are why it is shared from one generation to the next.