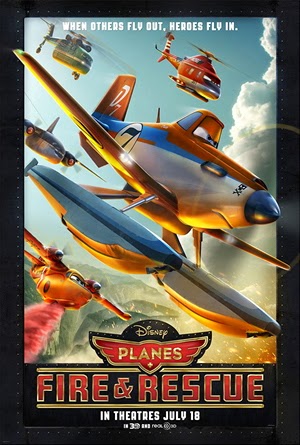 ANIMATION/ACTION/DRAMA/FAMILY with elements of comedy

Planes: Fire & Rescue is a 2014 computer-animated fantasy action film and drama that was produced by DisneyToon Studios.  It is a direct sequel to the 2013 film, Planes.  The Planes film series is a spinoff of Pixar's Cars film franchise.  Planes focuses on Dusty, a cropduster plane who dreams of competing in a world-famous aerial race.  In Planes: Fire & Rescue, Dusty learns that he may never race again and begins training as a firefighter to help his hometown.

As Planes: Fire & Rescue opens, Dusty Crophopper (Dane Cook) continues his successful aerial racing career that took off after he won the Wings Around the Globe Rally.  However, the high rates of speed at which Dusty flies leads to some internal damage that may end his racing career.  After an accidental fire closes the airport in his hometown of Propwash Junction, Dusty offers to undergo training to be certified as a firefighter.

He travels to Piston Peak National Park to train under Blade Ranger (Ed Harris), a veteran fire-and-rescue helicopter, and the crew he commands, the Piston Peak Air Attack.  Dusty, however, is over-anxious and his training proves to be a difficult challenge, even as a major fire strengthens and threatens the entire park.

There is no way that I expected Planes: Fire & Rescue to be a better film than Planes, which I really liked, but the sequel surpasses the original.  Why is that?   Fire & Rescue has heart; it's that simple.  Dusty Crophopper's problems:  the dilemmas he faces, his conflicts with his new colleagues, his self-doubts, his grief over a possibly lost career, and his desperation to prove himself all over again make for surprisingly gripping drama.

Yes, I said drama.  Pixar's films are strongly dramatic, even when there is a lot humor or at least a strong undercurrent of humor.  The Planes films are a spinoff of a Pixar series, but are not produced by Pixar.  They are produced by another Disney unit (DisneyToon Studios).  Still, Fire & Rescue feels kind of Pixar-ish, and that is, of course, a good thing.  This film is more of a heartwarming drama than it is a comedy for children.

Fire & Rescue is also a topnotch aerial action film.  It is still hard for me to believe that computer-animated air planes and helicopters in action could be as exciting to watch as live-action airplanes and jets, but it is true.  My interest in the story soared with each new flight scene.

Once again, the voice acting cast supporting Dane Cook is good, and that means a good film for family viewing and a good film in general.  In fact, I think that if more adults gave Planes: Fire & Rescue a chance, they would like it.


Posted by Leroy Douresseaux at 5:28 PM