Review: "Maleficent" is Not Just Another Hollywood Fantasy Film 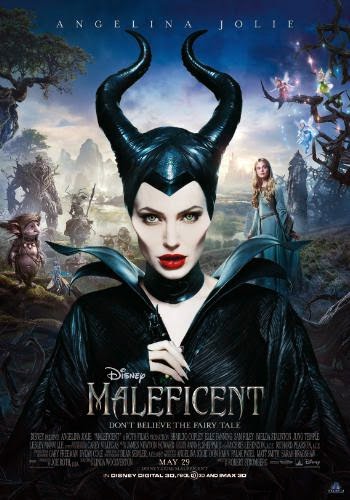 FANTASY/ACTION/DRAMA with elements of adventure

Maleficent is a 2014 fantasy and action film from director Robert Stromberg and writer Linda Woolverton.  Released by Walt Disney Pictures and produced by Joe Roth, the film re-imagines Walt Disney's 1959 animated feature film, Sleeping Beauty, and focuses on the point of view of Maleficent, the villain in Sleeping Beauty and a classic Disney villain.  In Maleficent the movie, a vengeful fairy curses an infant princess and becomes fascinated with the child as she grows up.

Maleficent is set in a land where there are two kingdoms, the Moors, the magical realm of the faeries, and a human kingdom that borders it.  An ambitious human monarch, King Henry (Kenneth Cranham), covets the Moors, but finds his efforts to conquer it stymied by Maleficent (Angelina Jolie), the queen fairy.

Stefan (Sharlto Copley), a human who has known Maleficent since they both were children, believes that he has a solution to the conflict between the humans and the denizens of the Moors.  However, this solution leads Maleficent to place a curse on Aurora, an infant human princess.  Years later, Maleficent discovers that Aurora (Elle Fanning) may be the only one who can restore peace and hope to the troubled land.

One the books that I have had in my possession for the longest time is the 1980 edition of The Classic Fairy Tales by the husband-and-wife folklorists team, Ioan and Peter Opie.  The book contains some of the best-known fairy tales in the English language, including “Sleeping Beauty” (as “The Sleeping Beauty in the Wood”).  The emphasis of The Classic Fairy Tales is on the earliest English publications of stories like “Sleeping Beauty,” “Cinderella,” and “Beauty and the Beast,” rather than reprinting, as the text on the back cover declares, later “prettified” versions of those classic fairy tales.

Maleficent is certainly pretty, even gorgeous.  The costumes, clothing, head-wraps, and jewelry that Angelina Jolie dons as Maleficent can be described as “classic couture.”  The production design is lavish and simply beautiful; in fact, the director of Maleficent, Robert Stromberg, is an Oscar-winning production designer for how work on Avatar (2009) and Alice in Wonderland (2010).  The creature design and CGI on the fairies of the Moors and on the dragon in the final battle have qualities that make them both tangible and magical; they're quite lovely.

However, Maleficent is not prettified.  It is not the prettiness and beauty or the baroque wonderland that is the Moors that make Maleficent a unique and splendid film.  The thematic richness that digs beneath the pretty and simplified surface of classic fairy tales makes Maleficent something that is rare in modern film – a fairy tale that is an allegory about the complexities of the human condition.  Linda Woolverton composes a screenplay that offers a feminist reinterpretation of Sleeping Beauty, and the result is Maleficent.  This is a film that does not portray women as princesses waiting for the prince-hero or knight-hero who will save them and then, marry them happily-ever-after.  This film is about women, but it portrays them with complexity and subtly in depicting their relationships with other women, with the world, and with themselves.

That is not to say that this movie does not kick-ass.  The battle scenes in Maleficent are far more exciting and visually interesting, even striking, than all those fantasy movies that desperately tried to copy Peter Jackson's Lord of the Rings films.  Somehow, the man versus magical creature battles in Maleficent manage to seem fresh and new.

I do have some complaints about Maleficent.  Much of the first half-hour of this film lacks a sense of direction and is stiff.  [Perhaps, that is why writer/director John Lee Hancock assisted on the re-shoots of the opening scenes.]  The pixie trio and Stefan are under-realized characters, exemplifying the character missteps that keep this film from being a truly exceptional fantasy masterpiece.

Overall, however, I like this movie a lot.  Angelina Jolie proves her star power and talent, because this movie could not exist without her playing the lead.  Maleficent is not a Disney classic, but I think it will be memorable, because it is a distinctive dark fantasy film, where as so many other American epic fantasy films seem as if they come from the same bag of stale cookies.


Posted by Leroy Douresseaux at 5:08 PM