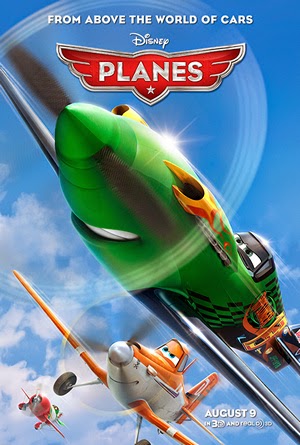 Planes is a 2013 computer-animated fantasy adventure film and sports comedy that was produced by DisneyToon Studios.  It was originally intended to be released straight-to-video, but was instead released to movie theaters as a 3D film in August 2013.  Planes is a spinoff of Pixar's Cars film franchise and is co-written and executive-produced by John Lasseter, the director of Cars (2006) and Cars 2 (2011).  Planes focuses on a cropduster plane who dreams of competing in a world-famous aerial race.

Planes opens in the small town of Propwash Junction and introduces Dusty Crophopper (Dane Cook).  This young airplane is a cropduster, but he dreams of being an air racer and even has a racing alter-ego he calls “Strut Jetstream.”  Dusty's pal, a fuel truck named Chug (Brad Garrett), encourages Dusty's dream of flying in the airplane race, the Wings Around the Globe Rally.

However, Dusty was built to be a cropduster, not an air racer, but he is determined.  After barely qualifying for the rally, Dusty seeks the help of an elderly and reclusive Navy war plane named Skipper (Stacy Keach), who reluctantly agrees to help him.  Still, the odds are against Dusty, and so are some of his competitors.  Does he have what it takes to win?  Does Dusty truly understand the motto “Volo pro veritas” (“I fly for truth.”)?

I was kind of interested in seeing Planes when it first played in movie theaters, but I changed my mind.  However, I was able to get a Blu-ray copy for review of its sequel, Planes: Fire & Rescue, which was released to theaters in July 2014.  So I decided to see the original film, and I have to be honest, dear reader:  I really like Planes.

The characters are a mixture of familiar little-guy heroic types, ethnic stereotypes, and assorted comic caricatures.  But they're mostly all lovable, and stand-up comedian and actor, Dane Cook, who can be, at best, an acquired taste, is quite good as the voice of Dusty Crophopper.   Carlos Alazraqui is a treat as El Chupacabra, a friendly competitor of Dusty's in the Wings Around the World Rally, and Sinbad makes the most of his character, Roper, the forklift who is also a rally official.

Planes is a well-written version of the little engine that could (in this case, an airplane), and the writers are constantly putting believable obstacles in his way that the audience will want to see him overcome.  Some, like me, will find their hearts lifting as Dusty soars over those obstacles, and also over his primary antagonist and rival, Ripslinger (Roger Craig Smith), who is the kind of jerk I want to see get his comeuppance.  I enjoyed Planes enough, surprisingly so, that I'm ready for the sequel.


Posted by Leroy Douresseaux at 5:27 PM